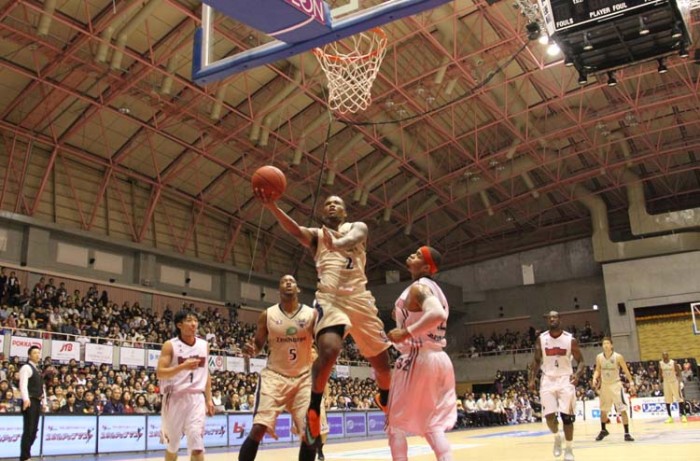 Draelon Burns made 15 of his total 26 points on Sunday with five three-pointers.

The challenge in the Basketball Japan League is finding a team capable of beating the Ryukyu Golden Kings, who’ve run their winning streak to ten in a row with weekend victories over the Bambitious Nara.

Okinawa’s professional basketball squad now stands 10-2 on the season, with a firm grasp on first place in the Western Conference.  Playing in front of the home crowd at Okinawa City Gymnasium, the Golden Kings whipped out a 78-69 victory in the first of two contests Saturday after a shaking first quarter start.  Trailing at the outset, Okinawa evened things at 38-38, and didn’t look back, thanks to Kibwe Trim.  Anthony McHenry was the sparkplug as the Golden Kings took the game to overtime, and the win. 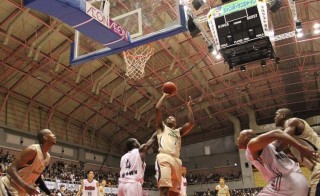 Draelon Burns readying to sink yet another one in Saturday’s game that the Kings won 78-69 on overtime.

Playing their final home game before the holidays put them on the road to finish the year. Okinawa put on a show Sunday, overcoming an early 25-17 Nara lead. Kibwe Trim was hot on the boards, turning the tables to a 41-36 lead, aided by three-pointers from Draelon Burns and Masaya Karimata.  Shigeyuki Kinjo was on a roll in the second half, working beneath the basket to give Okinawa another 17 points.  Burns’ total for the day was 26 points, with 15 of them coming on five three-pointers.

Golden Kings coach Isa praised his team for “taking the pace” and for turning adverse situations into moments of “great value”.  His squad now heads to Osaka for a series this weekend against the Osaka Evessa.