Nobody, simply nobody, can stop the Kings 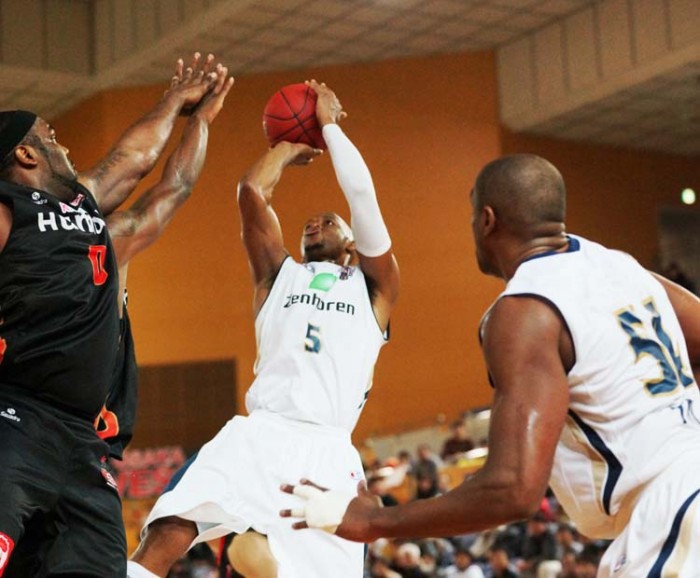 Anthony McHenry made the winning shot at the buzzer on overtime, Saturday. (Photo by Junya Nashiro)

The road to basketball victories is filled with bumps and potholes, but for now, no team in the Basketball Japan League has found a way to even slow – let alone stop — the high flying Ryukyu Golden Kings, who’ve run their consecutive winning streak to 12 games. 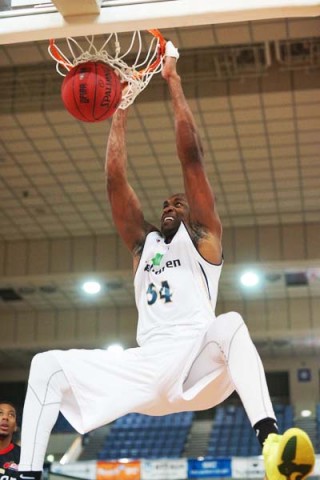 Kibwe Trim, the tallest player of the Kings, shows how it’s done. (Photo by Junya Nashiro)

The latest victims to fall at the hands of the powerful Okinawa squad, which leads the Western Conference while holding the best record in the entire league, were the Osaka Evessa.  Although the games were played on Osaka’s home court, they couldn’t muster the staying power to win either contest, falling 79-77 and 74-60.

“The Kings deserved to win,” said Evessa head coach Toshinori Todo.  “The game was filled with turnovers and we made many mistakes, while Okinawa made no mistakes,” he explained of the Saturday game filled with indecision on both teams’ part.  Okinawa was on a roll behind the three-point shooting of Draelon Burns, but then became squeaky close, trailing 41-40 at the half.  At one point Osaka led by 11 points before Naoto Kosuge and Burns caught fire, stayed persistent, and brought the game to a tie late in the fourth quarter.  It was Anthony McHenry who made the winning shot for the Golden Kings at the buzzer.

“The only thing good about today’s game was that we won,” said Tsutomu Isa, Okinawa’s head coach.  “We were not able to put to use anything we practiced.”  He was right in predicting that “hopefully tomorrow we will win another for the sake of the fans who came from Okinawa.”  The fans were elated as Okinawa showed up at the Osaka Sumiyoshi Sports Center to watch their team rip off an easier 74-60  win, the team’s 12th straight.  “We were able to play the game at our pace,” smiled Isa, “and we played our way.”

The Golden Kings are now 16-2 on the season as they head to Higashi Gymnasium in Hachinohe, Aomori Prefecture, to take on the Aomori Wats this weekend.