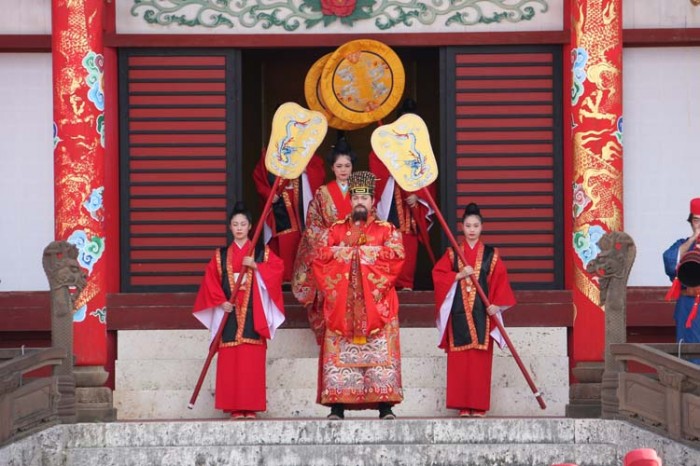 The king steps out to the courtyard to start the ceremonies.

A Royal ceremonies reenactment is to take place at Shuri Castle during the New Year celebration from Jan. 1st ~ 3rd.. 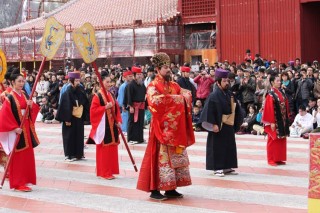 The Ryukyu Royal procession on the Shuri Castle courtyard during the New Year celebrations.

The ceremony brings the New Year’s greetings to the Emperor who incorporated the essence of the Ryukyu Dynasty, a flashback to history.  Ryukyu dancing suitable for a king and queen is presented in a ceremony called “Chouhaiokishiki”.

The ceremony runs in three parts.  The Ninufanuunufee is a ceremony to the God of heavens to worship, and is the ceremony during which the upper and lower sides set the heart to one, also while it was solemn, and celebrated the new year praying for peace.  The second element, the Chounuunufee, looks at the beginning of the year, when people celebrate the king in a ceremony with prayers for prosperity of the Ryukyu Kingdom.

The final ceremony, Ohtohri, invites subordinates and the king to drink a cup of awamori together in celebration.  The ceremony includes prayers for the prosperity of a king, a prince and a grandchild.  Throughout the ceremonies, performances of musical instruments and Ryukyu traditional dance takes place.

Admission to Shuri Castle Park is ¥800 for adults, ¥600 for high school students, and ¥300 for junior high school and elementary students.  Kids under age six are free.  Officials say a few events will be held in the free zone, where there is no charge.