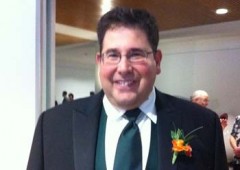 This week’s winner of the Japan Update weekly raffle is Riad El-Bdour. He won a pair of tickets to the trick art exhibition that amazes visitors at Okinawa Outlet Mall in Toyosaki.

Riad calls Sacramento, California, his home, but he says that he has visited Okinawa every year since his brother started working here in 2008. He adds that he is currently looking for a job in Japan, and if he’s successful, he’ll be here for some time to come.

“I have been here only about a month, but it’s been a great time for me as I have had fun with my two nieces and one nephew here,” he says. He also has found already his favorite local food, which is okonomiyaki. His two favorite restaurants are King Tacos and Mos Burger.

He also finds the weather great. “Besides, its never too far from the ocean,” he adds. Other things that he likes here are Okinawan music, Eisa, Taiko drummers, ruins of old castles, and Shuri Castle Park.

He is planning to see a Japanese baseball game, perhaps in February when the Japanese pro-teams come to Okinawa for their spring training camps. “I also would love to see a Golden Kings basketball game, too,” he says.