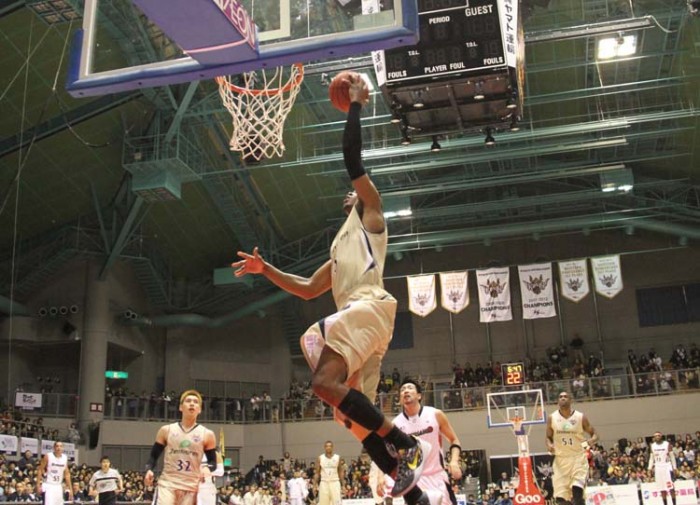 Anthony McHenry contributed a hard day’s work to the Kings’ wins on both days.

The Ryukyu Golden Kings are virtually unstoppable, now on a seven-in-a-row win streak, the latest pair of victories in front of the home fans 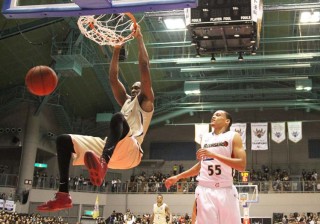 Kibwe Trim scored 10 points in Satyurday’s game and bettered that to 16 on Sunday.

The Basketball Japan League defending champion Yokohama B-Corsairs were the latest to feel the intensity of facing both the powerful Golden Kings and their fans at the Ginowan City Gymnasium, falling fist 77-67, and then adding some excitement as they pressed Okinawa to overtime before taking an 87-81 tumble.

Despite having some difficulty hauling down rebounds, the Golden Kings planted 12-of-24 three-point attempts to maintain momentum.  Ryuichi Kishimoto picked up a 19-point tally, while teammates Anthony McHenry contributed 13 and Kibwe Trim 10 along with an equal number of rebounds.  Naoto Kosuge had nine points, and Morihisa Yamauchi provided another eight for the Golden Kings. 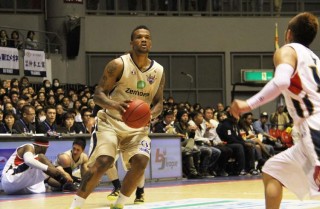 Draelon Burns did his share contributing 13 points on Sunday.

Okinawa head coach Tsutomu Isa saw the problem, noting “Yokohama was able to take our rebounds more than anticipated.”  He did some tweaking following the game, fixing the rebounds problem even as his team’s shooting accuracy dipped.  Sunday’s game saw the Golden Kings actually trailing at halftime, 39-28.

“Double overtime wasn’t expected,” said Isa.  “As the champion team, Yokohama strongly held its ground to the very end. They were proactive, changing members and adjusting on the court to play as they usually do.”  B-Corsairs coach Michael Katsuhisa wasn’t pleased. “I have never regretted losing a game as this one. The players,” he said, “were able to correct the mistakes done yesterday, but at the end, the defense made some careless mistakes and mentally was crushed by Okinawa.”

The Golden Kings, now 23-3 overall and 15-1 at home, wrapped up the double-overtime contest with five players in double figures.   Anthony McHenry again led the squad with 22, while Kibwe Trim scored 16, Draelon Burns 13, Ryuichi Kishimoto 11 and Jeff Newton with 10.  Okinawa, leading the league’s Western Conference, is also in possession of the league’s best home record.

Elsewhere in the BJL, the Shimane Susanoo Magic dropped their eighth and ninth consecutive games over the weekend, pummeled by the Toyama Grouses.  Toyama spoiled Shimane’s debut by a new coach, Reggie Hanson, with a 68-52 win, followed by a 78-71 victory Sunday.  The Grouses are now 23-7, while the hapless Shimane squad falls to 5-23.  The Kyoto Hannaryz bashed the Gunma Crane Thunders, 89-63 in the first of their two match-ups, only to fall 112-108 Sunday in a double overtime contest. Kyoto’s now 19-11, while Gunma sits at 6-22.

The Osaka Evessa split a series at home, winning 92-71 over the Niigata Albirex BB in the first game, only to lose 76-54 in the second.  The Albirex 19-9 and the Evessa stand at 11-17 on the year.  The Akita Northern Happinets needed overtime to get a win over the Sendai 89ers Saturday, 91-86, then applied more pressure Sunday as the Northern Happinets claimed a102-90 win.  The Northern Happinets are now 26-4, possessing the best record in the Eastern Conference. The team’s won nine straight.

The Aomori Wat’s demonstrated how playing at home is like magic, dispensing the Fukuoka Rizing twice, 75-67 and 84-80 in double overtime Sunday, to boost its record to 12-14.  Fukuoka is now 11-17.  The Iwate Big Bulls were twice victorious on the road, outdistancing the Oita HeatDevils 61-56 and 68-58.  The Big Bulls extend their record to 19-7, including a 10-2 record playing on the road.

Basketball Japan League action goes into hiatus this weekend, clearing the way for Sunday’s All Star game to be played starting at 1 p.m. This is the league’s eighth annual All Star game.