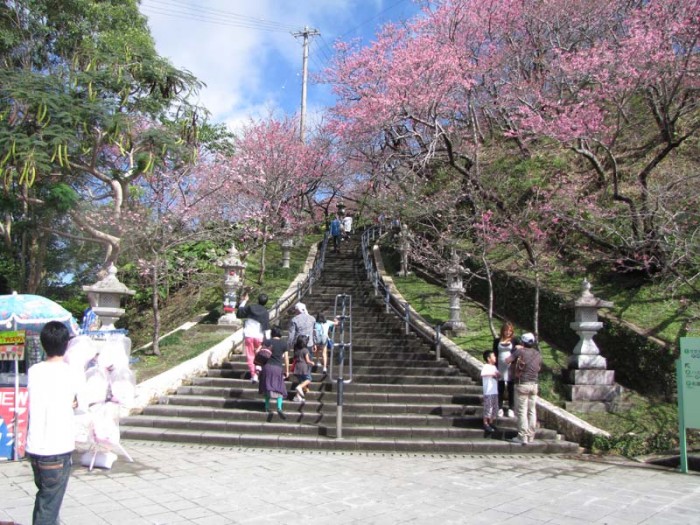 The stairs leading to Nago Castle site is lined with Taiwan Cherry trees.

For newcomers to Okinawa, the Nago Sakura Festival, the Cherry Blossom Festival, ranks as one of the most beautiful events of the year, with Mother Nature showing off her colors with the traditional flowers.

Opening ceremonies are at 11 a.m. at the entrance to Nago Castle, followed by brass bands.  At the nearby Transit Mall on Nago’s main thoroughfare there are citizen participation events, including street dance, foods, amateur singing contests, Taiko drums, and an ice sculpture.

The festival runs through Saturday and Sunday, with everything from a costume parade to get things going, to the Transit Mall which has citizen events going on throughout the day, except during the parade. This year’s “best viewing” is forecast through Feb. 6th, although the cherry blossoms will be on the trees across Nago and nearby Mount Yaedake through late February.In lesser numbers, cherry trees will soon be spreading their blossoms in areas to the south, including the capital city of Naha.

This year more than 20,000 pink Taiwan cherries are in full bloom. Festivities are held at the base of Nago castle, the expansive home to the local Aji chieftain in the 14thcentury. The area is now Nago Central Park, where thousands of Taiwan cherry trees show their beauty early each year.  Good walking shoes or sneakers are recommended for the trek up the well marked and paved roads and walkways to the top of the mountain, where there’s a spectacular view of not only the cherry blossoms, but of Nago and the brilliant shimmering waters of the East China Sea.  Be assured that you’re not alone.  The event draws tens of thousands of locals, as well as Okinawa visitors. 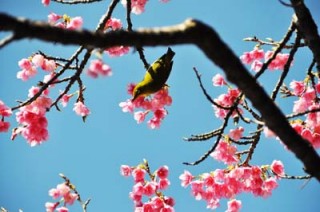 Humans are not the only ones who appreciate cherry blossoms.

The beauty is free.  All else takes yen to purchase.  As with all festivals, there are food and beverage vendors, game stands, and of course, souvenir shops and stands.

The Nago Cherry Blossom Festival is pretty much an all-day excursion, partly because of the walking, viewing, eating and listening to the music, but also because of the traffic.  We note that traffic is heavy, because you’re not the only one wanting to see the cherry blossoms.  To get there, take the Okinawa Expressway all the way to the last exit in Kyoda and continue north to Nago. Once in Nago, turn right onto Route 84 under the walkway. On your right you will see Orion Brewery. Turn right and then left at the brewery gate and you’ll see the festival are to your right.

During cherry blossom season and on the days of the festival it is advised to park well away from the park both for cost and to allow for an easy escape when leaving. There will be many pay parking areas with people trying to get your attention to park.  From the bases, plan on at least one hour travel time to get there.  Don’t forget to have the little ones make their pottie breaks before leaving home.

To visit Mount Yaedake, follow the same route, but instead of turning right to Nago Central Park, continue on Hwy 38 north through Nago and then turn lef onto Route 84 to Motobu. Just before Motobu, watch for signs to left to Mount Yaedake.

Once the cherry trees are in full bloom, the entrance to Nakijin Castle is an impressive sight. There’s a small fee to enter the castle itself.

To visit Nakijin Castle, go through the Nago City following Hwy 58, and turn left on Highway 84, heading toward Motobu.  Shortly before Ocean Expo Park, turn right on Highway 449 and you’re two kilometers away.  The route is clearly marked.