Futenma base foes gird for battle 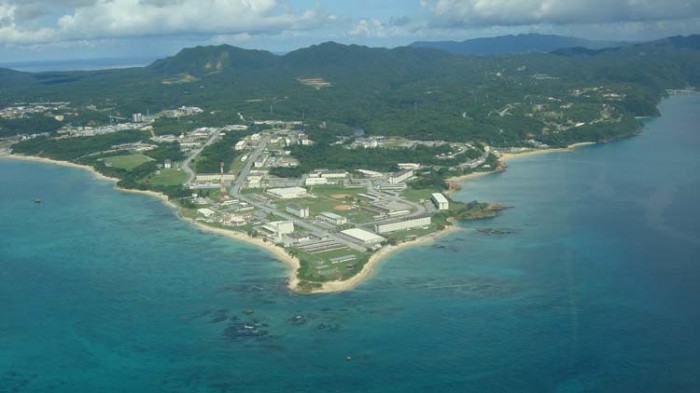 Camp Schwab will be the focus of everyone in 2014 as all sides ready for the battle of wills.

Opponents of the plan for relocating Futenma Marine Corps Air Station from Ginowan City to the Henoko district of northern Okinawa’s Nago  City are angry with the governor’s decision to approve land reclamation for the area, and are vowing to continue fighting the move.

Governor Hirokazu Nakaima late last month signed the order authorizing the landfill operations to begin for constructing two V-shape runways in Oura Bay, adjacent to Camp Schwab in the sparsely populated northern part of the island.  His controversial decision has been praised by supporters of getting the controversial base moved from Ginowan, and lambasted by opponents who won’t settle for anything less than removal of the base from Okinawa.

The government and the United States have indicated that won’t happen, and Governor Nakaima appears to have yielded to the inevitable, plumped up by billions of dollars in promised financial support from the central government to further develop Okinawa.  The promise for ¥346 billion a year through 2021, plus billions to build the second runway at Naha International Airport, plus money for constructing a light rail system on the island, all are said to have influenced Nakaima’s final decision.

Still, that decision isn’t making opponents go away.  They’re threatening to generate both protests and lawsuits as they fight the governor’s decision.  Opponents say they’re not swayed by the fact Futenma will be moved to a much safer environment, and that Okinawa stands to grow because of the decision. “What the governor has done is unforgivable,” says the leader of the Nago City Municipal Assembly,Yuichi Higa.  He contends that “Residents who are opposed will surely resort to the use of force, such as blocking roads, to stop this from happening.”

The leader of another Nago City group opposing the new Futenma Replacement Facility, Hiroshi Ashitomi, says a lawsuit is coming to try blocking the governor’s action.

The governor is, by some popular definitions, between the rock and the proverbial hard spot, appreciating the need for moving Futenma and growing his prefecture, while remaining somewhat committed to getting the base safely off Okinawa.  He’s still telling Prime Minister Shinzo Abe he wants Futenma off Okinawa, but he’s also speaking loudly that his concern is that Futenma be closed within five years.  Under the current plan, that wouldn’t work because the new base won’t open until 2022 under the present design.  Still, Abe has said he’d try to make it work, so there’s still a question.  In the meantime, Nakaima continues to repeat his belief that “My thinking remains it would be fastest to relocate (the base) outside the prefecture to a place where there is already an airport.”

Since Nakaima’s decision and Abe’s promise to look into expediting the construction of a new base, U.S. defense leaders say the Futenma Replacement Facility could be open earlier if the project is quickly moved forward.  With the new airfield linked to a Japan-U.S. Agreement that shifts 9,000 Marines from Okinawa, there is incentive to make a five-year plan work.  Defense Secretary Chuck Hagel wants it to work, because he calls the shift in U.S. forces in the Pacific “absolutely critical to the United States’ ongoing rebalance” in the Asia-Pacific Region.”  Hagel says “Moving forward with this plan will reduce our footprint in the most populated part of Okinawa . . . while sustaining U.S. military capabilities vital to the peace and security of the region.”

The U.S. Congress may fall in line with making the adjustments.   Senator John McCain, who’s been to Okinawa and studied the plan closely, is praising Nakaima’s signature as a critical move “after 17 years of hard work and setbacks.”  Congress must appropriate funds to construct new facilities on Guam to accommodate about 5,000 Marines President Barack Obama promised to move there from Okinawa..

Around half of the 50,000 U.S. troops deployed in Japan are in Okinawa, and many residents complain about base-related crime, noise and the risk of accidents. Some feel the prefecture is bearing an unfair share of the burden of protecting Japan from attack.

“The government of Japan is poised to take whatever measures are necessary to maintain a strong deterrent while reducing the burden on the people of Okinawa,” explains Yoshihide Suga, the Chief Cabinet Secretary.  He’s also watching the January 19th mayoral election in Nago City, which could create either an element of peace and tranquility, or further rile opponents.