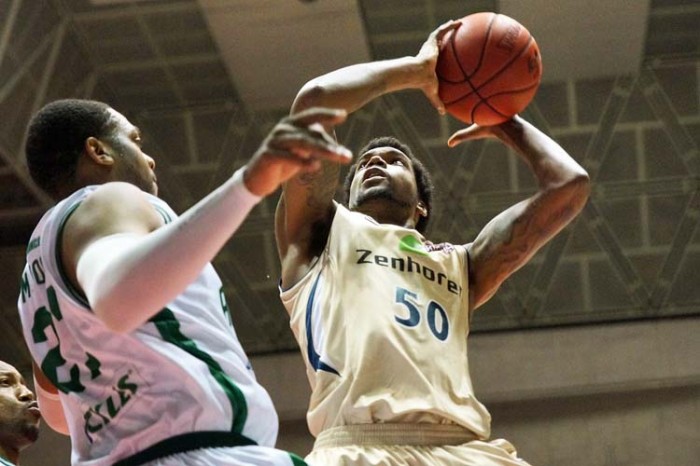 Jeff Newton put up solid performance on both Saturday and Sunday as the Golden Kings solidly drubbed Saitama Broncos on both games. (Photo Junya Nashiro)

Proving that a late December loss that shattered a long running win streak was a fluke, the Ryukyu Golden Kings kicked off the new year on home turf with a sweep of the Saitama Broncos. 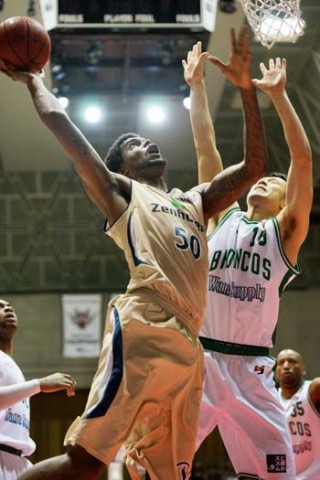 It took only moments for the Golden Kings to launch a 2014 attack, with Naoto Kosuge and Ryuichi Kishimoto splashing three-pointers while the team rolled like a well oiled machine to win 83-62 in the first contest.  Anthony McHenry was a sparkplug and Masaya Karimata’s outside court performance kept Okinawa ahead throughout, including 39-35 at halftime.  Shigeyuki Kinjo’s fierce defense and Jeff Newton’s presence under the basket kept the game from ever getting close.

“I feel great relief to have won the year’s first home game,” said head coach Tsutomu Isa, “but there are still many problems to solve.”  Saitama head coach Takatoshi Ishibashi wasn’t sure about what problems Isa was concerned about; he said “we weren’t able to act on Okinawa attacks, and our repeated mistakes lead to the huge gap on the scoreboard.” 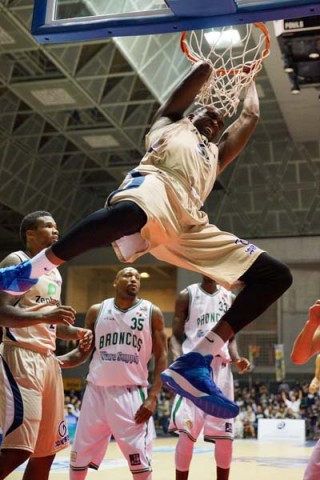 Kibwe Trim showing his prowess in front of the home audience of 3,485.  (Photo Junya Nashiro)

Sunday was no easier for the Broncos, as Jeff Newton led the pace Sunday at Naha City Gymnasium.  The Kings won 77-57 to push their record to 19-3.  Draelon Burns’ three-pointers insured Saitama couldn’t get traction despite putting up a tough defense.  Burns joined Morihisa Yamauchi to lead in scoring.

“The games on both days were really complicated,” lamented head coach Isa.  “There were ups and downs.” Saitama’s coach Ishibashi praised the Kings for “taking the rebounds, making it impossible to unfold the game.  Okinawa continues at home, taking on the Takamatsu Five Arrows on the 13th and 14th at the Okinawa Budokan in Naha.

Elsewhere in the Basketball Japan League, the Rizing Fukuoka led by Reggie Warren of the University of West Florida, upended the Toyama Grouses 80-77.  Warren scored 19 points, 19 rebounds and had three assists.  The defeat of the 19-6 Grouses was a shocker from Fukuoka, who now have a 9-14 record.  The Grouses bounced back, though, hammering the Rizing 82-70 on Sunday.

The Oita HeatDevils swept a pair from the Kyoto Hannaryz, 83-70 and 76-71, handing Kyoto their third straight loss. The Takamatsu Five Arrows also racked up a two-game sweep, thumping the 4-20 Gunma Crane Thunders 85-75 and 86-81.  The Nara Bambitious outlasted the Shiga Lakestars 75-69 in their first outing of the year,  only to lose to the 12-14 Lakestars 87-71 on Sunday.