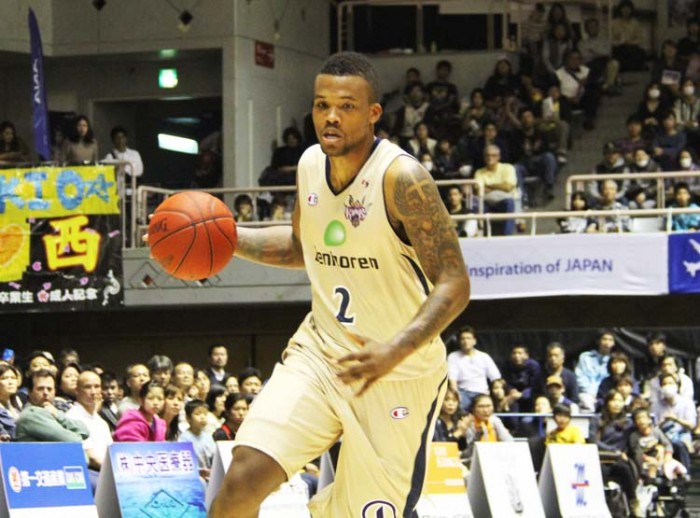 The Ryukyu Golden Kings are again on a roll, racking up a two-game sweep against the Takamatsu Five Arrows in front of the home fans in Naha as they make it five-in-a-row.

The Golden Kings trounced the visiting Five Arrows twice, 82-64 on Monday and 91-64 on Tuesday at the Okinawa Budokan in Naha, keeping their record atop the Western Conference of the Basketball Japan League intact at 21-3.  For the record, Okinawa’s lost only one game on its home turf, while tallying 13 home court victories.

“I’m happy to have won with all the fans watching and cheering us on,” says Okinawa head coach Tsutomu Isa.  His pleasure at the two wins aside, his focus is on what’s coming up: “Our next game we will be playing against last year’s championship team Yokohama B-Corsairs, and I can’t wait for the challenge.”  Monday’s game was a rout, but for a few moments, the 13-13 Five Arrows tried to butt heads in Tuesday night’s clash. 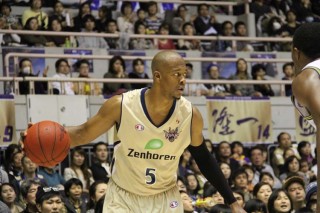 Anthony McHenry did his usual reliable job again during the weekend matches.

Jeff Newton led the strong offensive effort for Okinawa, backed by the three-point shooting of Ryuichi Kishimoto.  By halftime, Okinawa led 51-32. It got even better for the Golden Kings in the second half as Morihisa Yamauchi joined Kishimoto in chasing the mistake-prone Takamatsu squad all over the court.  Add to that the efforts of Draelon Burns, who picked up 18 points, eight assists and seven rebounds during his 29 minutes on the court.

Eight Golden Kings players picked up more than a half-dozen points in the Tuesday night game before a crowd of 2,894 at the Budokan.  Included was  a sterling effort by Newton, who scored a season-high 15 points.

Elsewhere in the Basketball Japan League over the holiday weekend, the Fukuoka Rizing beat up on the hapless 5-21 Shimane Magic, taking a pair on the home court, 88-68 and 91-82.  The wins keep the Rizing in the hunt for a playoff berth, now sitting on the verge of qualifying for the sixth and final playoff position.

The Saitama Broncos snapped a 19-game losing streak on Saturday, beating the equally helpless Gunma Crane Thunders 93-61.  Saitama was without a victory in the Eastern Conference since picking up a victory last October 19th.  The Broncos won thanks to John Humphrey’s 37 points to win their third game of the year against 21 losses.  Gunma is now 4-21.

The Akita Northern Happinets outdistanced the Shiga Lakestars 108-84 to sit aside the Golden Kings of Okinawa with the best records in the BJL: 23-4.  The Shiga Lakestars are 12-15 as teams begin posturing for shots at playoffs action only a couple months away.  The Kyoto Hannaryz had an easy time of whipping the Bambitious 74-49.  The win improves their record to 17-10, while the Bambitious drops to 5-19.

The Toyama Grouses outlasted the Shinshu Brave Warriors, 94-82, to keep them well positioned for the coming playoffs with a 21-6 record.  The Brave Warriors, with a 15-8 record, remain confident of their playoff hopes.  The Hamamatsu Higashimikawa Phoenix took a victory away from the Aomori Wat’s, 68-52, as they fight for position in the Western Conference.  The Phoenix are 14-11 while the expansion team Wat’s is 10-13.

The Iwate Big Bulls powered their way to an 80-72 win over the Tokyo Cinq Reves Monday behind a 28-point effort by Lawrence Blackridge.  Led by former Okinawa head coach Dai Oketani, who powered the Golden Kings to two championships, the Big Bulls maintained control throughout the evenings against the 6-18 Cinq Reves, now playing in its second sason.  The wins keep Iwate in third place in the Eastern Conference behind the Toyama Grouses and their 21-7 record, and Akita, at 24-4.  The Big Bulls are 17-7.