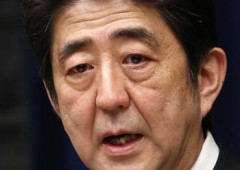 Prime Minister Shinzo Abe popularity is on the rise despite his unanimous condemnation by Japan’s neighbors.

Prime Minister Shinzo Abe has his hands full at the moment, with issues ranging from the China-Japan dispute over the Senkaku Islands, Korea-Japan antagonism over a range of issues including his recent visit to Yasukuni Shrine and refusal to back down on aggressive plans for Japan’s future, and mounting opposition to his deal with Okinawa Governor Hirokazu Nakaima to move ahead with the Futenma Replacement Facility.

Still, Japan as a whole thinks Abe’s government is doing a good job, and has boosted his opinion poll ratings to 62%.  That’s a jump of seven percentage points in only a month’s time, according to the Yomiuri newspaper.  At the same time, Abe’s principal opposition, the Democratic Party, dropped to 4% compared with the Liberal Democratic Party, Abe’s Party, ranking of 40% approval.

Support for the Prime Minister had dipped to the lowest point since he took office a year ago, but that was more than a month ago.  Since then, his economic policies and his tough stance on issues propelled him forward.  Economic policies alone rose 5% in the ratings to 60%.