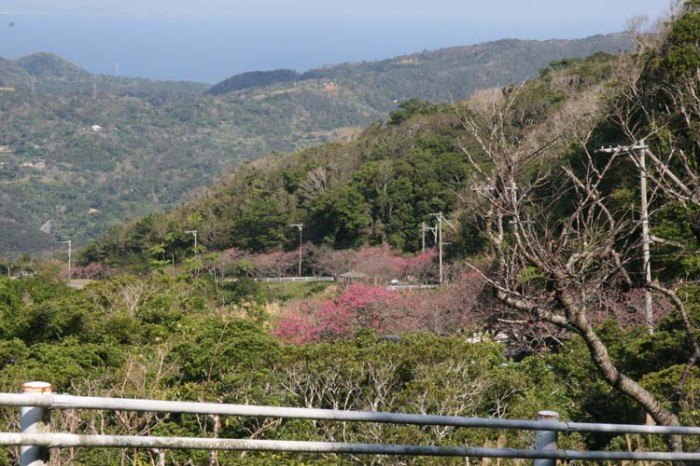 About 40 percent of the cherry trees along the road up to Mt. Yaedake are now in bloom with the number of blossoms increasing by day.

Okinawa being first in the nation with Mother Nature’s beauty is good, but actually seeing the colorful pink sakura, the cherry blossoms, and breathing in the fresh air at the same time, puts the 36th Motobu Yaedake Sakura Festival at the top of sightseeing events this weekend. 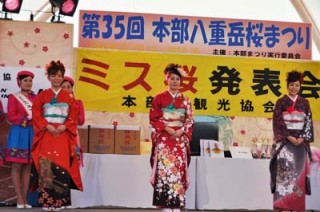 One of the highlights this weekend on Mr. Yaedake is the crowning of Miss Sakura.

The blooming cherry blossoms are the signal for the ritual visits to the greater Nago City area in northern Okinawa over the next several weeks for a close-up look at one of the island’s most famous flowers.  The seasin get under way both in Nakijin and Motobu this weekend, with Nago’s most famous festival beginning January 25th.

The 36th Motobu Yaedake Sakura Festival runs through February 2nd, with admission free to Yaedake Forest of Sakura Park in Motobu Town.  The flowers’ beauty is best seen the Mount 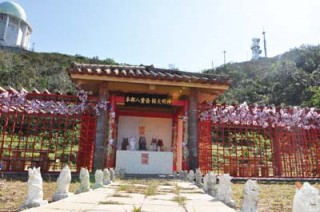 A pavillion in the park near the top of Mt. Yae houses several shisa.

Yae along the road up to the hilltop with an altitude of 453 meters, all dyed in pink Taiwan cherry blossoms.  The Motobu Yaedake Sakura Festival is the first of the year as the flowers bloom earliest here.  The festival involves a cherry tree exhibition, dance and drum performances, and the beauty of the flowers.

The opening ceremony for the 36th Motobu Yaedake Sakura Festival starts at 2 p.m. At the ceremony, the 2014 Miss Sakura will be announced, karaoke contest will be held and there will be dances from the children of Motobu. On the 19th starting from 12 p.m. there will be attractions like clown shows, the most delicious Okinawa soba contest and more. On the weekends of Jan. 25th and 26th, and on Feb. 1st and 2nd, there are more events and concerts scheduled.

The Yaedake Cherry Blossom Festival is held in mid January every year. Yaedake, the second highest mountain on Okinawa (453.4 meters) is designated as a prefectural wildlife reserve. The road to that goes up to the top is 4.5km long and is lined with 4000 Kanhi-Zakura Cherry trees which were planted on both sides of the street. Unlike Somei-Yoshino Cherry blossoms, which can be seen in the mainland of Japan Kanhi-Zakura Cherry blossoms have a vivid pink color. These Cherry trees were planted by the Okinawa-U.S Friendship Association for the purpose of cleaning up the street while Okinawa was under the U.S. Military control after the war. Local residents and U.S. Military personal worked together to cut out naturally grown cherry trees and plant them along the street. A large number of people from all over Okinawa visit this mountain during the Cherry Blossom Festival. From the observation deck on the top of the mountain visitors have a sweeping view of the town of Motobu as well as Ie Island off in the distance.

Once the cherry trees are in full bloom, the entrance to Nakijin Castle is an impressive sight.

Visiting Nakijin Castle Cherry Blossom Festival is also chance to see the historical site of one of Okinawa’s most famous ancient castle ruins.

Not quite as established, but just as beautiful, the 7th Nakijin Sakura Festival kicks off Saturday on the ruins of Nakijin Castle.  The lighting of the cherry blossom trees is each evening, with last entries at 8:30 p.m.  Admission is ¥400 for adults, and ¥300 for all school age youngsters.

Although the cherry blossoms at Nakijin Castle site blossom somewhat later than those on Yaedake, the festival starts on the same day. 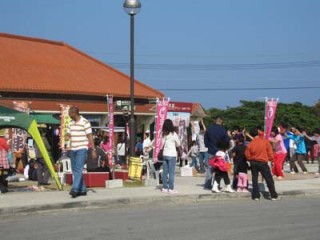 Entertainment at Nakijin Castle takes place at the Visitors’ Center that is outside the castle itself. Ticket for entrance to the castle are also sold here.

The ruins of Nakijin Castle were registered as a World Heritage site with eight other historical sites within the prefecture.  From the castle gate to the main enclosure, in the Nakijin ruins of a castle which residents are as proud of as the Shuri Castle in Naha, about 300 cherry trees stand in a single row.  The pink of the cherry trees look beautiful in the ramparts of the tasteful building blocks, the nocturnal view of cherry blossoms as lit, and the spectacle of the region.

Imajin drum performances take place from 6 p.m. Saturday, along with a Kakizome art exhibition by Tabashusui.  Kakizome is the first calligraphy writing of the New sYear, where auspicious words such as Kibou, meaning hope, and Haru, meaning spring, are painted on Kakizome with a brush.  The Nakijin festival continues on stage Sunday afternoon beginning at 4:30 p.m.  with the music and eisa performances. The festival continues the weekends of January 25th with a set of dances and traditional entertainment, and the weekend of February 2nd with announcement of the king and queen of Hokuzan.