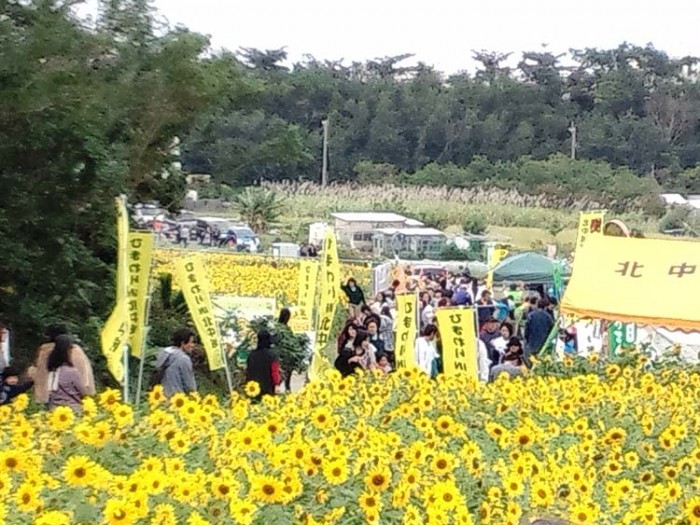 It may be winter in Okinawa, but that’s not slowing the burst of golden yellow in the fields of Kitanakagusuku, where sunflowers are in full bloom.

Kitanakagusuku Village is proud of the sunflowers –about 40,000 sunflowers, about 10% of the 400,000 flowers begun in central Okinawa are now in bloom—and is opening its annual Himawari Festival on Saturday to celebrate.  The free festival runs through February 2nd, with the fields open to the public from 10 a.m. ~ 4 p.m.  Aside from viewing and photographing sunflowers, local farmers will be touting their wares, and foods and beverage stands will be operational. 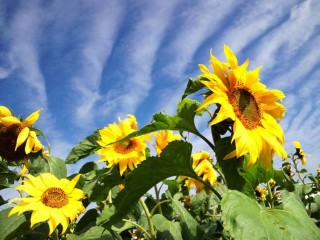 The plantations at Adaniya and Ogidou, a total of about 10,000 square meters, are becoming a brilliant golden yellow.  The sunflower, which is indigenous to America before migrating to Asia via Europe in the 16th century, is enjoying sunshine’s return after being impeded by cool temperatures and rain, their huge, fiery blooms tracking the sun daily from east to west. Mainland Japan is celebrating the sunflower’s bright color with the Kitose Himawari Festival, which will also see the sunflower and its broad, coarsely toothed and rough leaves and circular flower heads consisting of 1,000-2,000 individual flowers linked at the receptacle base.

The sunflower’s popularity was enhanced when its flavorful oils were squeezed out and the product became a widespread cooking ingredient. Sunflower leaves aren’t wasted, either, being used for cattle feed and the fibrous stems for paper production.

Sunflowers often grow to 1.5~5 meters (5-12’) tall, with the flower petals within the sunflower’s cluster are usually in a spiral pattern.