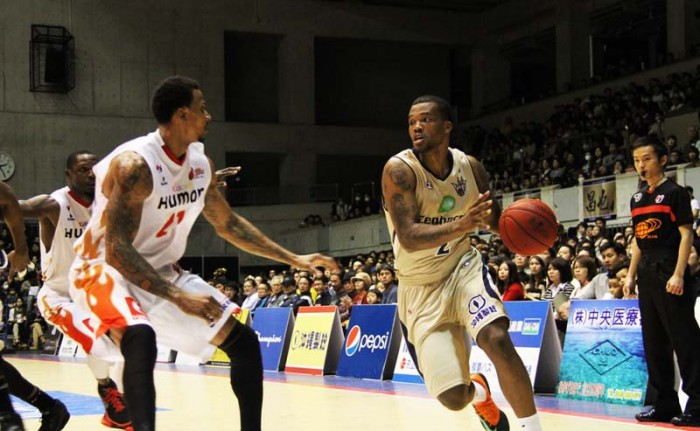 Same song, but different verse, as the Golden Kings for the third time this season are on their way with another winning streak, this time hammering the hapless Osaka Evessa in front of home fans. 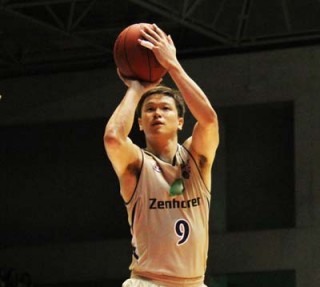 The Ryukyu Golden Kings are sporting the best record in the Basketball Japan League’s ten-team Western Conference with 26 wins against only four losses.  Perhaps more astounding is the single home loss this season, compared with 16 wins to please the home spectators.  Saturday’s win over the Osaka Evessa was a simple case of hard play, coupled with Naoto Kosuge and Ryuichi Kishimoto pumping in three-pointers in the 72-63 win.  Osaka managed to grab a 10-point lead in the second period, but Draelon Burns caught fire and brought Okinawa back to lead 37-35 at the half.

“We were able to attack Osaka’s defense,” says Okinawa head coach Tsutomu Isa.  “On the outer court our high percentage shots worked perfectly.”  He was even happier with Sunday, as his Golden Kings couldn’t be touched.  Four three-point shots were the basis of Ryuichi Kishimoto’s game-high 17 points, while 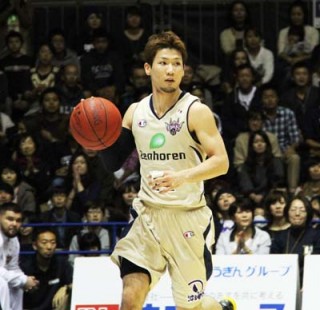 teammate Kibwe Trim added 16 as the Golden Kings picked up their 17th home win of the year. Anthony McHenry had 10 points for Okinawa, which has yet to be beaten by the Evessa and nine other opponents this season.

“Our next goal, “says head coach Isa, “is to keep developing our game on the court to last the entire 40 minutes, or at least close to it.”  Osaka’s head coach, Shunsuke Todo, lamented that “in the most important places, Okinawa made the shots, took our rebounds, and ended up with us handing them a second chance at victory.”

Elsewhere in the Basketball Japan League, the Kyoto Hannaryz split a series with Fukuoka Rizing.  The Hannaryz won handily, 78-62 as they pushed to 21-12, only to be stunned by a squeaky 61-59 bounce back win by the 14-18 Rizing on Sunday.  The Shiga Lakestars picked up a pair of wins over the Takamatsu Five Arrows, grabbing an 89-73 win Saturday, and using overtime to their advantage Sunday for an 82-79 win.  Shiga’s now 16-16.

The Iwate Big Bulls led by former Okinawa head coach Dai Oketani split a series with the Toyama Grouses in a tightly contested series.  Iwate won 85-77 in the first match, only to fall 77-72 on Sunday.  Iwate is now 21-9 overall, while the Grouses are 24-8.  The Aomori Wat’s knocked off lowly Tokyo Cinq Reves 74-66 and 84-68 on Tokyo’s home court.  Tokyo, a struggling squad facing the first year Wat’s franchise, is 7-23, while Aomori is 14-16.

The Shinshu Brave Warriors knocked the sails out of the Akita Northern Happinets on Sunday, kicking the legs out from beneath the Shinshu 12-game win streak.  The Northern Happinets easily won Saturday’s game, 100-79, but ran into a fired up Shinshu squad that burst the win bubble that began December 12th with a 105-102 win.  Akita is still at the top of the BJL pile, almost matching Okinawa with its 29-5 record.  The Brave Warriors are still in the fray with a 21-9 season.

It was a 1-2 punch for the Hamamatsu Higamikawa Phoenix, knocking out the Oita HeatDevils 69-54 and 77-66 to stay in the hunt for a playoff berth with its 21-11 record.  The Sendai 89ers found redemption Sunday after losing a squeaker, 76-75, to the Yokohama B-Corsairs on Saturday.  Sunday they turned the tables and bashed Yokohama to win 77-59.  The middle-of-the-pack teams will have to work hard for a shot at the playoffs coming up in April. Sendai’s now 14-16 while Yokohama’s 14-16 as well.

The Saitama Broncos took to the road last weekend, beating the Susanoo Magic 85-78 on Saturday.  They failed to keep momentum Sunday, losing to the Magic 88-77. The Magic improved to a mere 7-25, while their cellar-dwelling compatriots, the Bronos, are 4-28.  The Gunma Crane Thunders split their weekend ceries against the Niigata Albirex BB.  The Crane Thunders won 91-84 on Saturday, then fell apart Sunday, losing 92-74.  The Albirex are still in the thick of competition for a playoffs berth with a 21-11 record, while Gunma’s struggling to simply avoid the worst team in the league status with its 7-25 record.