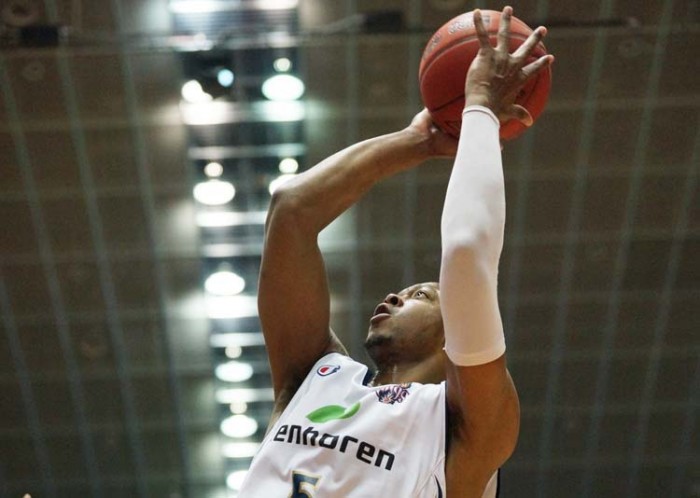 Two people plunged the dagger into the collective heart of the high flying Ryukyu Golden Kings Saturday, smashing a seven-game winning stretch and causing only the team’s second loss in 20 games. 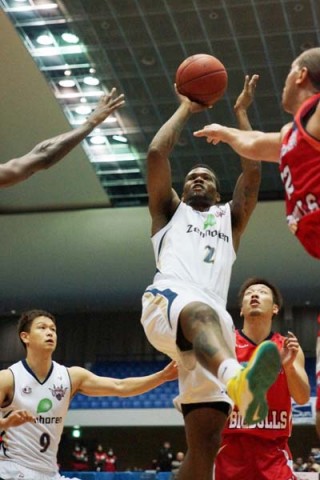 Draelon Burns made 13 points against Iwate Big Bulls in Saturday’s game, which the Kings lost 76-83 on overtime. (Photo Junya Nashiro)

Gyno Pomare proved to be a nightmare for the Western Conference leading Ryukyu Golden Kings, scoring 33 points while picking up 21 rebounds to lead his Iwate Big Bulls to an 83-76 overtime win on the home court at Oshu City Gymnasium in Iwate Prefecture.  Pomare was shooting 12-for-19 from seemingly everywhere on the court, while being even calmer at the free throw line, where he dropped in nine-of-nine.

Dai Oketani, who was ousted as the Golden Kings head coach a couple seasons ago after leading the team to a pair of Basketball Japan League Championships, is now leading the 20-8 Iwate Big Bulls.  He was polite in his heart-thumping win over the Golden Kings.  “Although we were playing against a strong team, we were playing terribly in the beginning, but then finally started playing as we should.  If we hadn’t had the follow through, the strong Golden Kings would have taken the game.”

Golden Kings head coach Tsutomu Isa felt his squad was “playing as we should for the first half, but in the last five minutes of the fourth quarter we fell to pieces. We were playing in doubt.”  Shigeyuki Kinjo was the bright spot for the now 24-4 Golden Kings with 15 points, while Kibwe Trim and Anthony McHenry both contributed 14 and Draelon Burns 13 in the losing effort.

Okinawa bounced back Sunday afternoon, pulling out an 89-78 win behind the power shooting of last year’s league MVP, Anthony McHenry, who fired a game-best 25 points including a pair of three-pointers.  He also hauled down eight rebounds while making three steals.  Also shooting well was Ryuichi Kishimoto, who poked in 19.  Draelon Burns contributed with a dozen points, plus six assists and a pair of steals for Okinawa.  Okinawa went 19-for-21 from the charity stripe, shot 12-for-19 in the three-point zone, and was shooting better than 51% from inside.  Equally important, Okinawa’s defense contained Saturday’s nightmare, Gyno Pomare, allowing him only nine points and nine rebounds.

“We were having a great game in the beginning,” said losing coach Dai Oketani.  “The Kings are great. They knew we were coming in aggressively.”  Okinawa coach Tsutomu Isa noted “this game with Dai Oketani was exhausting, but today’s results are very much more satisfying.”

The Golden Kings are at home this weekend, taking on the shaky Osaka Evessa at Naha City Gymnasium.

Elsewhere in the BJL, the Akita Northern Happinets ran their win string to 11 straight with a pair of wins over the 13-17 Takamatsu Five Arrows.  They whipped Takamatsu 100-77 in the first matchup, then extended their winning record to 28-4 with a thrilling 77-75 Sunday afternoon road victory.  The Northern Happinets are now leading the Eastern Conference.  The Shimane Susanoo Magic picked up a 79-77 road win against the Sendai 89ers in their first meeting Saturday, then lost in overtime 75-73.  The Magic is now 6-24, while the 89ers are 13-15.

The Nara Bambitious outdistanced the Tokyo Cinq Reves 87-58 in their series opener, only to be thumped a bit themselves, 91-75, in the Sunday contest. Tokyo broke a 10-game losing streak with the victory, improving their record to a nominal 6-21 against the Bambitious 9-21. The Osaka Evessa picked up an 87-78 win over the Yokohama B-Corsairs Saturday, improving their record to 12-17.  Sunday they did it again, completing the sweep with a 74-58 win over the 13-15 B-Corsairs.

The Niigata Albirex BB split a series with the Kyoto Hannaryz, picking up the Saturday win 82-75, before falling Sunday 90-70.  Kyoto is now 20-12, while the Albirex BB rides high with a 20-10 record.  The Hamamatsu Higashimikawa Phoenix picked up its own weekend sweep to extend its record at 19-11, outdistancing the Gunma Crane Thunders 77-62 and 86-83.  The Crane Thunders were actually performing above normal levels, with a season record now at 6-24.  The Fukuoka Rizing slipped past the Saitama Broncos 79-76 in their first matchup, then did it a second time Sunday, 72-64, to plunge Saitama further into the league cellar with a 3-27 record.  Fukuoka, now 13-17, remains in the race for a playoff spot in the Western Conference, where five teams –Shiga, Takamatsu, Fukuoka, Osaka and Oita– all have 14-16 or 13-17 records.