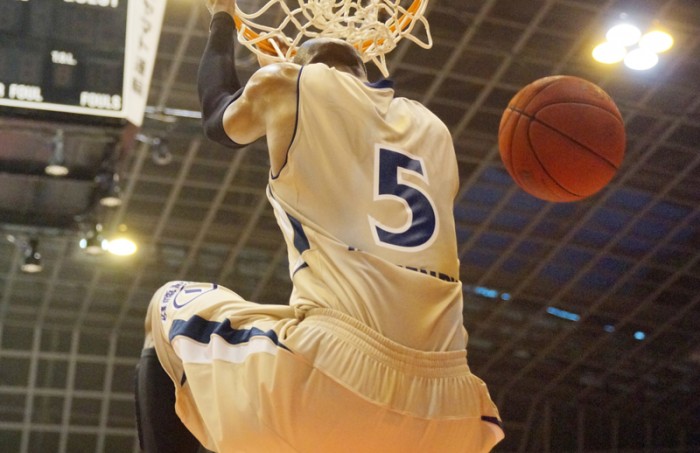 Anthony McHenry hangs in there. (Photo by Junya Nashiro)

The high-flying Ryukyu Golden Kings demonstrated their intense teamwork skills in front of an enthusiastic Ishigaki Island audience over the weekend, slamming the Takamatsu Five Arrows as they pushed their record to 29-5. 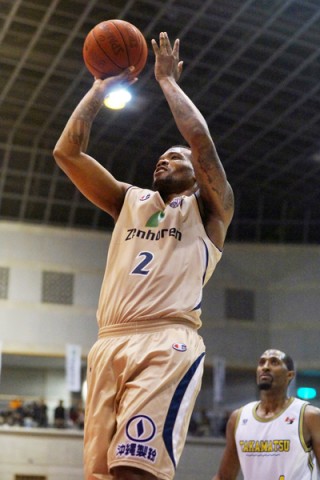 The Western Conference leaders, who also hold the best record in the entire Basketball Japan League, pulled out a 71-59 win in the first match against the Five Arrows, who mounted a mini-surge in the final quarter to make it appear close.  Ryuichi Kishimoto’s three-pointers put a stop to that hope, sending the Okinawa squad coasting the final quarter.
“I am relieved,” said Okinawa head coach Tsutomu Isa. “We only get to play once a year in Yaeyama, and we were able to challenge ourselves on some moves we had never tried before, and that was a good experience.”  Anthony McHenry led to Golden Kings with 16 points and 11 rebounds as his teammates were shooting above 51%. Kibwe Trim capped the night with a dozen points while Ruyichi Kishimoto finished with ten.

“We made some fatal mistakes, cutting our own rope,” said Takamatsu head coach Kenzo Maeda, hoping for a better Sunday. That wasn’t to be, though, as the Golden Kings buried the Five Arrows 93-67 to the delight of the fans.  Okinawa outscored Takamatsu 26-9 in the final period.  “We started to fall apart once we stopped being able to keep up with Okinawa’s drive,” Maeda added.

Draelon Burns led the scoring parade for Okinawa with 17 points, tied for the evening with Anthony McHenry, who also pulled down ten rebounds and provided four assists. Trim contributed a dozen points to the winning cause.

Okinawa now takes to the road for a series this weekend against the Shimane Susanoo Magic. Those games will be played at the Matsue City Comprehensive Athletic Park.

Elsewhere in the BJL, Fukuoka and Osaka battled in a series setting the stage for a potential playoffs berth. They split, when Rizing Fukuoka hammered Osaka 90-67 to move within three games of having a balanced season record.  The Osaka Evessa bounced back Sunday to give Fukuoka a taste of their own medicine, drubbing them 84-53.  The Evessa now hold a 15-21 record while Rizing is 16-20.  The Kyoto Hannaryz also found themselves in a weekend split with the Nara Bambitious, winning 79-67, only to end up on the shy side of a 76-65 game on Sunday.  The Hannaryz are 23-15 on the season, still in playoffs contention, while the Bambitious are 11-23.

Another split was registered in Ebina, Kanagawa Prefecture, as the Yokohama B-Corsairs pounded the Tokyo Cinq Reves 87-55 in the first game of their series. The Tokyo Cinq Reves nudged the Yokohama B-Corsairs on Sunday, 74-71, to prove that even a 10-24 team could put some scares into the reigning league champion. Yokohama has struggled this year, only able to muster a 16-18 record.

The Toyama Grouses roared to an 86-70 win Saturday to beat up another powerhouse, the Shinshu Brave Warriors.  Not to be outdone, the Brave Warriors eked out a 69-68 win Sunday to put their record at 22-12.  Toyama is now 27-9.

The Hamamatsu Higashimikawa Phoenix took their 23-12 record into Fukuroi in Shizuoka Prefecture, where they picked up an 86-75 win over the cellar-dwelling Susanoo Magic.  A day later the margin was even wider as the Phoenix blasted the 7-27 Magic 83-69.  The Iwate Big Bulls aced a pair of wins over the Aomori Wat’s, 66-53 and 70-67, to maintain their Eastern Conference record to 27-9.  Aomori, a first-year expansion team, is 16-18.