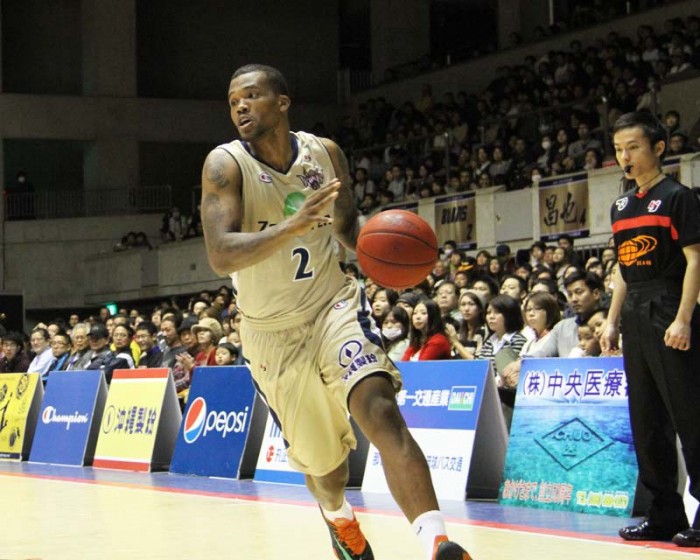 The Kyoto Hannaryz, chief rival to the Ryukyu Golden Kings in the Basketball Japan League’s Western Conference, took Okinawa to task in a weekend series, allowing the visitors to beat them 80-73 on Saturday, but stunned the Kings with a massive victory on Sunday.

Okinawa popped in more than 90% of its free throw attempts in Kyoto Saturday en route to an 80-73 win, sinking 19 of 21 attempts.  Draelon Burns was hot for the Golden Kings with 21 points, while teammates Kishimoto and Anthony McHenry each had 19, Naoto Kosuge eight and Kibwe Trim seven points.  Morihisa Yamauchi picked up another four points.  Okinawa struggled in the second half, slipping behind by three at one point, surging on the strength of Burns’ three-pointers. 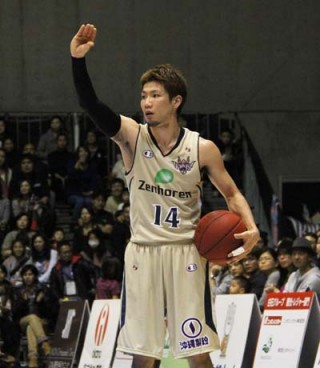 Ryuichi Kishimoto’s best efforts were not enough in Sunday’s game which the Kings lost. (file photo)

“Kyoto is a tough team,” says Golden Kings head coach Tsutomu Isa, pointing out “they’re a team with much strength in offensive rebounding.” Kyoto’s Hono Hamaguchi lamented his team’s losing momentum in the third quarter, which put Okinawa back on top for keeps.

Sunday was all about the Hannaryz proving the Golden Kings are not indestructible.  Kyoto surged to a 22-13 record while handing Okinawa its fifth loss of the year against 27 wins.  The victory keeps Kyoto on Okinawa’s heels as the BJL season moves into the final sector.  Kyoto had four players in double figures, while Okinawa’s Anthony McHenry led the Ryukyu effort with 15.  Ryuichi Kishimoto had 14, while Jeff Newton picked up eight and and Draelon Burns nine points.

“Kyoto put their best skills on the court Sunday, and sent us to complete defeat,” said Tsutomu Isa, adding “We’ll have to work harder to forge a team which gives 100% from start to the final second.”  Okinawa moves back to the islands for the weekend, taking on the Takamatsu Five Arrows the 22nd and 23rd at the Ishigaki Island Gymnasium.

Elsewhere in the BJL, Takamatsu broke out of an eight-game skid, dropping the high flying Hamamatsu Higashimikawa Phoenix 75-54 on Saturday.  The Phoenix turned the tables Sunday, winning a squeaker 72-71 contest to run their record to 22-11, including 11-7 on the road.  The Takamatsu Five Arrows slipped to 14-20.  The Toyama Grouses pressed their top-of-the-conference record to 26-8 with double victories against the Akita Northern Happinets.  The Grouses took the Happinets down 101-88 and 90-85, against the equally successful Happinets, who are now 29-7 on the season.

The Bambitious Nara, playing its first season in the BJL, split its series with the Rizing Fukuoka, winning 84-73 in front of the home fans Saturday, only to fall 78-58 Sunday.  The 15-9 Rizing is just ahead of the Nara, which holds a 10-22 record.  In a contest with no playoff implications, the Tokyo Cinq Reves moved to 9-23 against the Gunma Crane Thunders, 86-83.  The Crane Thunders are 7-27.  It took overtime for the Shiga Lakestars to eek out a 101-100 win over the Osaka Evessa Saturday.  Osaka evened the score Sunday with a 92-67 victory, improving to 14-20 against Shiga’s 17-17 record.

The Albirex BB played a double header Sunday after its Saturday game against the Albirex BB was postponed by their season opener’s snow in Honshu.  Niigata won both games, taking the Shinshu Brave Warriors 73-68 and 71-62.  The Albirex are now 23-11, tied with the Brave Warriors.  The Iwate Big Bulls pulled off a sweep of the Saitama Broncos on the Saitama home court, winning 83-73 and 87-80.  The victories push Iwate to 23-9 against low cellar dwelling Broncos, who are 4-30.