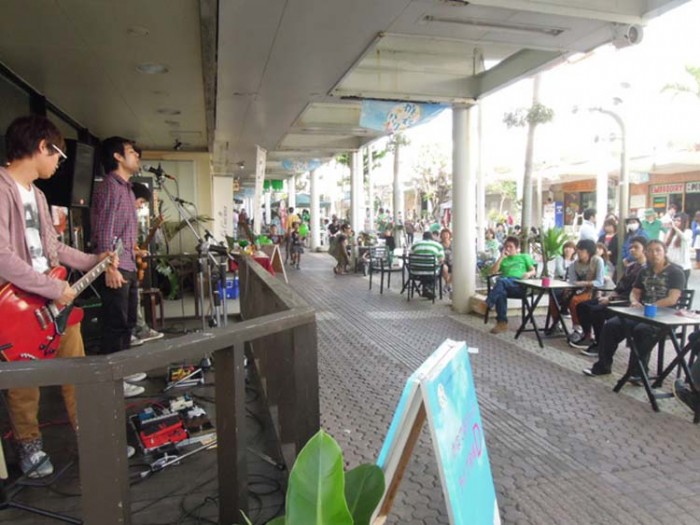 The Okinawa International Asian Music Festival Musix 2014 is little more than a week away, and excitement is mounting at the festival’s ground zero, Music Town Otoichiba in Okinawa City.

Musix, now in its fourth year, is an Okinawa-centered music event pulling together artists and fans from across Asia, then presenting a diverse range of rock, pop and Okinawa folk music, plus a bit more of this-and-that, at a number of venues across Okinawa City.  Musix runs Friday, Saturday and Sunday, February 14th ~ 16th.

The music in front of the Music Town continues through 9 p.m.

It is best described as an urban-style event where artists and music lovers from all over Japan and various places in Asia gather in celebration of music. From rock n’ roll and pop music to traditional Okinawan music, every corner of Okinawa is alive with diverse rhythms.  Musix organizers explain “The Festival was born from our vision of delivering the music of Okinawa to the world as our cultural industry, and its name comes from our concept of establishing Okinawa as the crossroads of music. Transcending borders and musical genres, numerous musicians and music fans will come together in Okinawa, embraced in the gentle warmth of a subtropical spring.” 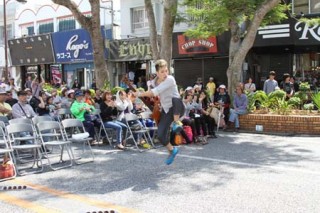 The Gate 2 Street will be cordoned off for street performances.

Originally produced with the idea of introducing Okinawan music to the world, it’s become a welcome exchange process marking Okinawa as the cultural center of Asia.  The notion’s so strong, organizers decided to signify by its name Okinawa’s the place where MUSIC crosses, and thus the ‘X’, producing MUSIX.  Some events and performances are free over the three-day festival, while others have admission fees.

The festival’s opening day has a free concert at Koza Music Town, 1s Floor, from 6 p.m. ~ 9 p.m.  Featured with be Youka, B Kozu, Houkago Melancholic.  In front of Koza Music Town, at the Oto Ichiba roof garden on Ichiba Street, Gate 2 in front of Uema Tempura, there’s to be a presentation of Taiwanese and Okinawan music and food interchange.  The event on the 15th runs from 2:30 p.m. ~ 8 p.m.

Down the street on Gate 2 Street, Super Music & OtoMOG Street Live, a free performance, takes place from 1 p.m. ~ 7:30 pm.  On stage will be Sakishima Meeting, Shakari, Kiiyama Shouten, Civilian Skunk, Asian 4 Front and Sansana.  Also on the 15th, starting at 7:30 p.m. at Koza Music Town, there’s Ayamiya no Utage.  This is a special version of the performance Ayamiya no Utage. Last year’s performance in August saw a total sell-out, but this time they’ll be live, and for free.  Look for Ryukyu dances, the Shishimai, or lion dance, plus Eisa drums and more.

Sunday’s action centers on Music Town Oto Ichiba for the Drum Voice Dance 2014.  Admission is ¥2,000 with an advance ticket or ¥2,500 at the door.  Performing will be N’jami w/Hidekatsu, Puahihano Afrikasia, Matahari Torbi, a gamelan playing group, along with Andarginha Segunda & BBB.  Also performing will be the Mabuhay Dance Group from the Philippines and Ryukyu Koku Matsuri Daiko.