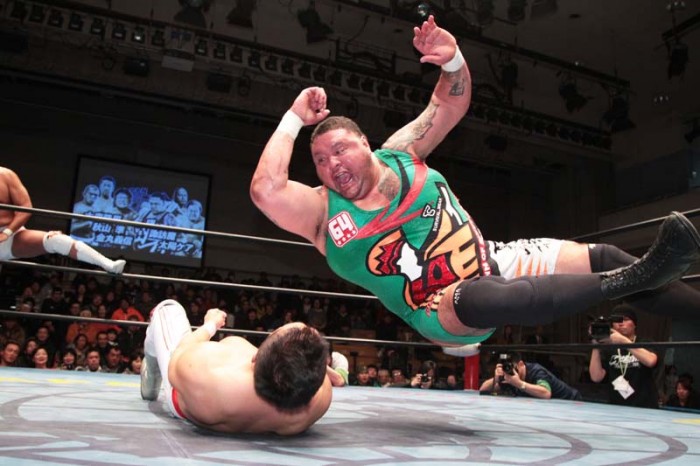 Akebono masters pro-wrestling moves as well as he used to dominate the sumo ring.

Professional wrestling’s heavyweight Triple Crown Champion headlines the card next month as one of the biggest pro-wrestling promotions in Japan comes to the Okinawa Convention Center in Ginowan. 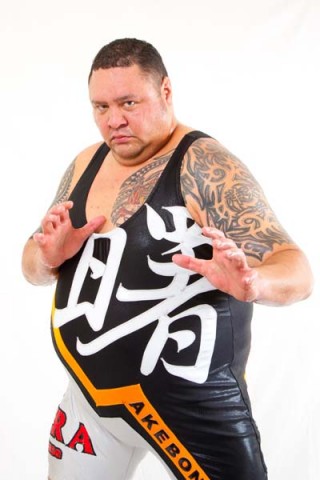 The highlight of the Okinawa Impact, the pro-wrestling program organized by All Japan Pro Wrestling, is the 60-minute title fight between Akebono, the 47th heavyweight champion, and challenger Go Shiozaki.  The February 23rd program begins at 4 p.m.

Akebono Taro, who was born Chad Rowan in Hawaii, is a former sumo wrestler who started as a professional in 1988, and eventually rose to sumo’s highest rank of Yokozuna in 1993, becoming the first foreign born wrestler ever to reach the rank. He became a Japanese citizen in 1996, and retired from sumo in 2001.

After retiring he worked as a sumo coach. The 203-cm-tall Akebono left the Sumo Association in 2003, and tried a career as a K-1 fighter, finally moving into pro-wrestling. Currently he is performing in the All Japan Pro Wrestling Association bouts. He holds the Zero 1 World Heavyweight Champion title.