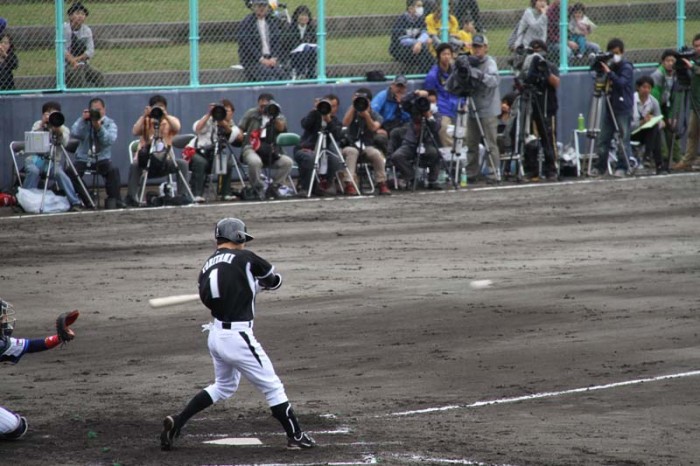 Ten of Japan’s dozen professional baseball teams and six from Korea are currently conducting their spring training in Okinawa Prefecture.

It’s hard to decide whether to be humming “Baby It’s Cold Outside” or “Take me out to the ball game”, because both fit the bill for this week’s blustery, windy weather. 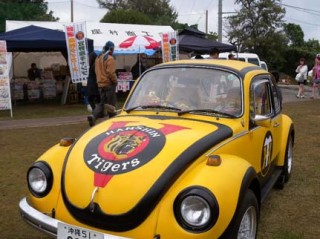 Some fans want to make a statement for everyone to see.

Ten of Japan’s twelve professional baseball teams, along with another six from neighboring South Korea, have uncased their baseball bats on Okinawa soil to begin spring training, a harbinger that winter’s soon to be history and everyone will be playing the sport. Teams will train throughout this month at various spots on Okinawa, with three of those teams going through the season preparations on other islands.

The Yomiuri Giants begin their Okinawa training regimen on the 15th, when they begin training at Cellular Stadium at Onoyama Park in Naha City. The Giants, along with nine of Japan’s other 11 professional teams, will practice in Okinawa Prefecture. In addition, six professional Korean teams are calling Okinawa home for this month as they begin tuning up for the 2014 season. Only the Fukuoka SoftBank Hawks and the Seibu Lions have elected not to train in an Okinawa location.
Spring training officially began February 1st, with a ceremonial start sponsored by Okinawa Prefecture and the Okinawa Tourism and Convention Bureau Sports Promotion Committee. Okinawa’s political leaders, team officials and sports directors turned out for the opening festivities. Baseball team banners are now hanging in front of the Prefecture Hall, as well as on Kokusai Street and at Naha International Airport, for the next few days. 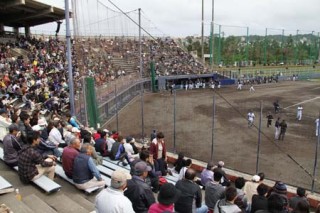 From Nago in the north to Miyako and Ishigaki in the far south of the prefecture, teams are warming up for the 2014 campaign in the Central and Pacific Leagues. The Hokkaido Nippon Ham Fighters are in Nago through March 1st, while the Hanshin Tigers are also in north in Ginoza Village, and the Chunichi Dragons are in Chatan.  The Yokohama DeNA Bay Stars are in Ginowan the full month, and Tokyo’s Yakult Swallows are practicing in Urasoe until Feb. 21st. The Hiroshima Toyo Carp are in Okinawa City from Feb. 21 through Mar. 3rd.

The Orix Buffaloes are on Miyako Island, where they’ll workout through the 21st. The Tohoku Rakuten Eagles are on Kume Island, going through their paces through mid- month at the local stadium. The Chiba Lotte Marines are again on Ishigaki Island for a spring training routine through the 19th.

Six South Korean professional teams have escaped the snow and frigid temperatures blanketing much of their peninsula.  The Samsung Lions are at Onna Village through March 5th, the LG Twins are here until March 4th in Uruma City at the Uruma Ishikawa City Gymnasium.  The Nexen Heroes are spending the next month on Okinawa’s main island, floating from one community ball field to another.  The Hanhwa Eagles have found a home in Kochinda until March 5th, the Kia Tigers are set up in Kin Town through March 4th, and the SK Wyverns are training at Uruma’s Gushikawa Baseball Stadium in Uruma City until the 3rd of next month.

Pre-season action on the baseball diamond is expected gets under way around the island shortly after mid-month. Pre-season contests begin taking place at various training sites in central and northern Okinawa.  For the inveterate baseball fans looking for a ‘fix’ after the end of the football season and home stretch of basketball, schedules, rosters and tidbits on many of the times are available at http://yakyubaka.com/.

The Yomiuri Giants have five games slated, all at Cellular Stadium in Naha. The 16th they face SK, Chunichi on the 18th, LG on the 20th, Samsung on the 25th and Hiroshima on February 26th.   The Hanshin Tigers are also doing five exhibition games, all at Ginoza.  Only five days before they face the Nippon Ham Fighters on the 11th, Samsung Lions on the 14th, and DeNA on the 16th.  February 19th the Tigers meet Rakuen and LG on the 25th.