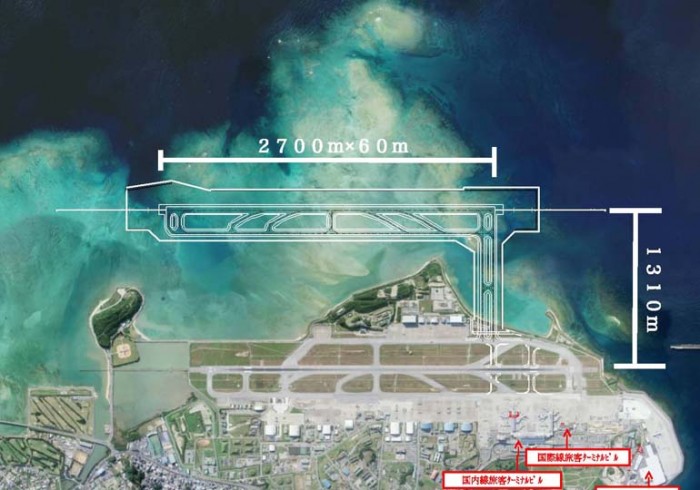 The 2nd runway of Naha Airport will be constructed on a landfill west of the current runway.

Talk of the need for Naha International Airport to expand with a second runway is over; full scale construction of the new 2,700-meter runway is set to begin this month.

Land reclamation comes first, creating the artificial island necessary for the runway to be completed in December 2019 and open for business in March 2020.  The ¥199.3 billion project is being funded by the central government by direction of Prime Minister Shinzo Abe last fall.  Formal approval by Okinawa Prefecture and the Naha Port authority came two weeks ago after all parties, including local fishermen’s cooperatives, gave their blessings. Okinawa Prefecture Government has asked Tokyo to provide results of aircraft noise surveys, and to assist with local coordination with municipalities for post-construction operations.

The currently allotted budget is ¥13.7 billion, with Tokyo paying ¥13 billion.  The coming fiscal year budget for runway construction is ¥34.7 billion, of which the central government will foot ¥33 billion.

The Okinawa General Bureau says everything is on track.  It completed a fisheries compensation contract with the Naha Coastal Fisheries Cooperative and four other associations Jan. 9th.  Environmental assessments were completed and approved last June.  Plans for transplanting seagrass beds and coral have already been developed.

The new runway is expected to boost Naha International Airport’s capability to handle another 20 million tourists per year.  Says the Director of Development Construction at the Okinawa General Bureau, Koji Kohirata, “We want to complete this in time for the 2020 Tokyo Olympics.”

Naha International Airport expansion has been continuous, with a new domestic terminal opening in 2000, and a dedicated Low Cost Carriers terminal in October 2012.  The new International Terminal opens February 17th.  Peach Airlines has set Naha as its second hub to move passengers between mainland Japan and southeast Asia.