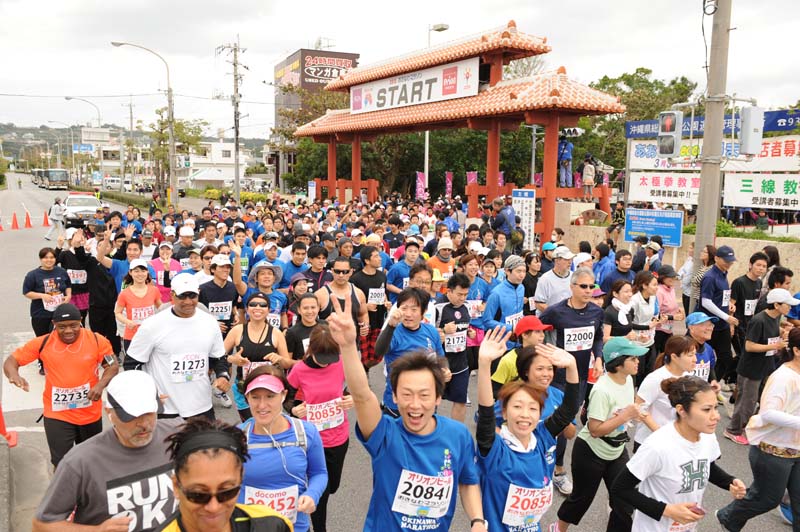 Start and finish are in Okinawa Comprehensive Sports Park in Hiyane, Okinawa City.

It’s anybody’s race to win Sunday as more than 11,000 runners step to the Naha starting line for the 2014 Okinawa Marathon.

The traditional winners of the past few years were all ousted last February, with new faces claiming the top spots. Tomonori Onizuka of Saga Prefecture captured the top prize last year with a time of 2:23:58, well ahead of 2012 winner Kouki Nakama who finished fifth at 2:29:39.  Nakama, from Chiba, had won both the 2012 Okinawa Marathon, and the 2010 event.  Second went to Sho Kazami of Aichi at 2:26:03, third to Tatsushi Ito of Tochigi, 2:29:03, and Yoshinobu Sunaga of Saitama, 3:30:07, was fourth. 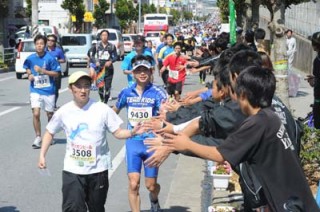 Well wishers and support groups line up along the entire race course.

The Okinawa Marathon is the best known of the island prefecture’s marathons, offering a grueling, challenging 42.195-kilometer course that takes runners through central Okinawa.  The Association of Okinawa Central Local Governments expects the event to be an inter-cultural exchange as well as an international road race.  Organizers have also plotted a 10km road race that kicks off one-half hour after the marathon start, at 9:30 a.m.  Registration has been closed for weeks, with an expected 11,000+ runners ready to hit the street from the Comprehensive Park starting line.

The weather’s expected to be fine for a Sunday run, with meteorologists predicting a zero chance of precipitation.  Temperatures are expected to be in the mid-60’s (18C).  Temperatures will vary across the 26.4 mile race route, as elevations vary from flatlands in the first eight kilometers to before moving a bit higher around Yokatsu and Kawata, than to areas more than 10 meters above sea level in the Kadena area. 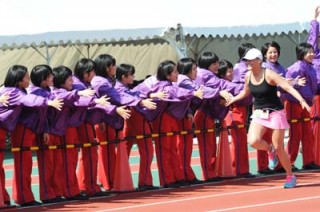 Many school sport clubs organize to have all their members on the course to greet and encourage runners.

The course works its way through Kadena Air Base, and the Air Force’s 18th Wing will provide support.  Runners will enter the base through Gate 2 on Kuter Boulevard, turn left onto Vincent Avenue at Chapel 2, then left on Schreiber Boulevard at Kadena High School, and exit through Gate 5.  Gates 2 and 5 will be closed to vehicles from 8:30 a.m. to 3 p.m.  A public affairs spokesman says pedestrians will still be able to enter both gates Sunday with authorized base passes.

Drivers should expect delays on Kadena, as marathon runners will have priority over vehicle traffic.  Officials say pedestrians will be allowed to cross the marathon route at the Main Street Food Court crosswalk, the crosswalk at the USO, and at a temporary crosswalk that will be set up behind the Officers Club to cross Kuter Blvd.  Traffic will be controlled by Security Forces.

The Okinawa Marathon begins at Awase, then carries runners through Takahara, near Koza, to Yonashiro Town, north to Kawata and then Agena Intersection, and on to the midway point near Camp McTureous.  The race continues to the northernmost checkpoint at Enobi, then turns southwest through Kariyushien, Chibana and Ikentou before moving onto Kadena Air Base, then out through Chatan town.  The final 10 kilometers travel through Yamauchi, alongside Camp Foster and into the home stretch to Comprehensive Athletic Park finish line.

There are five designated parking lots along the course: Shopper’s Awase, Tropical Technology Center (T.T.C), Kitanakagusuku Fisherman’s Association and Awase Fishing Port, which are about five kilometers away.  Parking is prohibited at Okinawa Comprehensive Park on race day.  Parking Lots are available from 07:00 a.m. on the race day.  To take public transportation: Buses, Taxies, and Carpools are highly recommended. Tow trucks will remove any illegally parked car around Okinawa Comprehensive Park.

Shuttle buses will be running on race day, and buses, taxis, and carpools are highly recommended.