A very big welcome to the Honorable Ambassador Caroline Kennedy.  I sincerely hope you connect to Okinawa, its people and unique history interwoven with American culture, Japanese, military legacy, memories of the typhoon of steel, Eisa, Karate and honorable resilience.  Stability starts at home.  I do pray that we can find a better balance that will be of mutual benefit and satisfaction to all at the table, Okinawans included!

I would like to respectfully modify one of my favorite quotes by JFK.  The use of the word “revolution” always brings images to me of stirring the pot, images of going around in circles and ending up right where you started.  It happens with dictators like Fidel Castro and others and many things.  I would like to take that redundant “R” out and think of “evolution”.  If revolution is stirring the soup, evolution is serving it.  With this in mind and the seemingly stagnant issues in Okinawa, I would modify this quote as follows: 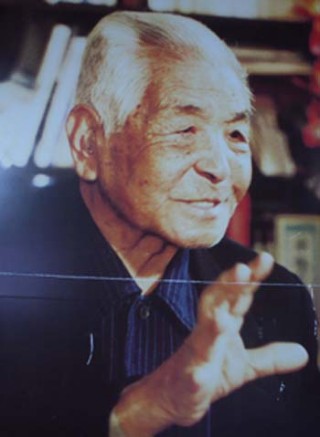 I am happy to say that this quote does not apply to Okinawa thanks to the legacy of Ahagon Shoko, a Christian farmer from Ie Island.  Ie island is where Ernie Pyle the famous WW2 War Correspondent lost is life and is honored every year.  Ahagon Shoko believed in non-violent protest.  I pray that his legacy will continue as we live this important year.

These are historical times.  On January 1st Yomitan Village became the most populous village in Japan.  Celebrating their new “No.1 Status”, the mayor in Lord Gosamaru regalia rang the original bell “Bankoku Shinryo – Bell to Bridge Nations” was rung from the Zakimi Castle ruins World Heritage Site.

On Sanshin (Okinawa Banjo Music) Day March 4th, in Yomitan the, US Army will hold a ceremony to celebrate its new name as US Army Garrison Okinawa changed from US Army Garrison Torii Station.  Great timing as many have been questioning why the religious Shinto Gates (Torii) were put there in the first place putting into question the separation of church and state. This is of special concern to many as Japan moves towards restoring its military.  The Torii symbols at installations seem more like a legacy of State Shinto.

Time softens most conflicts yet at the core, symbols can easily revive fires of discord.  Diagonally and across the gate behind the Family Mart, musicians will celebrate the legendary Aka Inko, the father of Sanshin music on this day.  Lets all celebrate.

With Governor Nakaima being symbolically recalled by a narrow margin by the Okinawa Prefecture Assembly, he is not the best person to say he represents Okinawa 1.4 million residents.   I hope that Okinawa will find leaders who are not baiting their elections with promises to later flip completely to the opposite.  Not much has changed since the Roman times yet the next elections for Nakaima’s seat might attract a Hollywood movie.  It is enough to make us wonder about this Pacific pivot in the name of stability but not in the name of democracy.  Can we have both?  Can we respect democracy in our island home while we seek regional stability?

Perhaps democracy as we dreamed it died when we sang Don McLean’s “American Pie”?  It reached its peak the same year of Okinawa’s reversion to Japan in 1972.  And last year, a midst protest and in the presence of their Imperial Majesties, the Prime Minister decided to celebrate Japan’s April 28th return to sovereignty.   A country needs to be completely restored to sovereignty in order to celebrate such.  This sent a message to many that “Okinawa/Ryukyu” is not and has never really been accepted as the “real” Japan.  Perhaps it is like Hawaii.  Yet, the USA is the USA because of its ability to absorb and melt.  The forced take over of the Hawaiian Kingdom has its parallels yet it appears to be a smoother blend with respect for local heritage.  The schools and use of the Hawaii language is impressive.

The Age of the Pacific, or better said an Asia-Pacific Age with stability for the future, has begun.  More needs to be done to address the core issues of the on-going conflict left over from the Pacific War and regional on-going hot spots, which no one wants to talk about such as Indonesia and West Papua independence to the leftovers from Myanmar to the Philippines.  China, Japan, Korea and the United States talking about war after all these years reminds us that many issues have been left on the back burner, un-resolved.  Gold and profit for TPP Corporate Nations.  Movies are more real.

Perhaps the territorial Island dispute needs to be shelved until our renewable energy capabilities have matured and the younger generation with less baggage can pick up the diplomatic effort in a few years.

The I Love Okinawa Campaign®, which I have been leading for the past 20 years with a focus on protecting the ocean and education for sustainable development, is now making the shift to better bridge this gap between our communities.  We announced on January 18th that we believe the Oura Bay needs to be preserved for the children of the 22nd century.  This column will be dedicated from now on to feature how our island communities interact in positive ways.  Your comments will be much appreciated.

In 1997, the Japan Advertising Council did a Kyushu wide campaign for our activity with the ad copy as: “The Ocean is everyone’s source of life, that is why we should protect this treasure for ever and all time” followed by the jingle:

“Okinawa’s Ocean is beautiful because there are people who care and protect our sea”.

We continue this mission and respectfully disagreed with Governor Nakaima’s decision understanding that the issue is complex.  We also hope that future public works projects in Okinawa will take into consideration the value of keeping Okinawa’s “post-card” scenery as a future economic asset along with the potential of becoming a scientific research and development cluster for Asia-Pacific.

The military presence on Okinawa is a difficult and emotional issue for many. Anything discussed about attitudes needs to follow the cumulative chronology of the U.S. and Japanese forces since before the Battle of Okinawa to date.  How did we get here?  Why do people in Okinawa have these attitudes about the U.S. and Japan?  How history has or has not been acknowledged is a possible root cause.  The “Bulldozers and Bayonets” legacy needs to be resolved by taking the moral responsibility of those actions by those charged with defending freedom and democracy.  Prime Minister Abe also needs to resolve issues of coming to terms with the history and how it is told to the future generations.  It would be wise that we all help resolve these differences before and by the Tokyo Olympics of 2020.

As the I Love Okinawa Campaign® we would like to focus on the positive aspects of our international community while promoting dialogue and community activities.  Mutual respect leads to peace.  It is the duty of those in uniform to defend the right to disagree in both of our democracies under the US – Japan Alliance.  Many mock, disrespect or out right disregard the principals, which have made the US the land of opportunity.  Mistakes in foreign policy often come out of this field ripe with moral disregard and self-interest.

To better address these issues, the NPO Okinawa O.C.E.A.N. (Ocean Culture and Environment Action Network) will be under new management from April 1st 2014 and no longer represent nor manage the I Love Okinawa Campaign®.  I have been chairman since its inception and will retire looking forward to the new leadership make a renewed commitment for education and environmental awareness from Cape Maeda in Onna Village.

The I Love Okinawa Campaign® will be managed independently along with the Okinawa International Clean Beach Club(tm) to foster positive relations between the international community in Okinawa, mainland Japanese residents, visiting students and U.S. Forces personnel along with their families stationed in Okinawa. as was its mission when founded in 1992.  The Campaign will have a special focus in promoting English reading and started the “Speak Good English Movement”.

A complete list of I Love Okinawa Campaign® supported projects will be released soon.

We are formulating the 3rd Stage from 2014 to 2034. Your comments and input will be helpful in drafting the road map to be announced on June 8th World Ocean Day.

Okinawa has huge potential as an Asia-Pacifc hub. We expect that Okinawa will be host to U.S. Forces for the long term future.  We hope that we can find balance and foment positive relationships.

For questions or comments use the Japan Update form below or e-mail: edo@okinawaocean.org  Our websites are under construction so please bear with us as we make the necessary changes to reflect the new status.  http://www.iloveokinawa.org