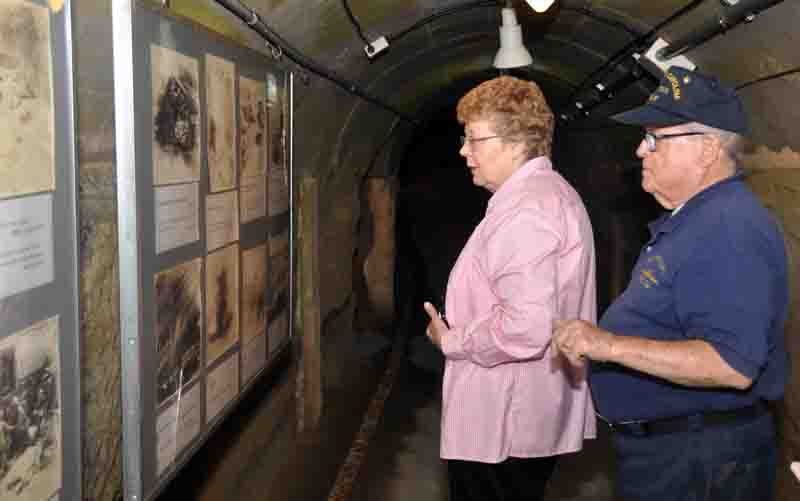 Lloyd and Judy Glick toured Okinawa for the first time in 59 years, including a visit to former Imperial Navy Underground Headquarters.

Lloyd Glick made his second visit to Okinawa this month, and he’s sharing the experience with his wife by explaining the island today is a darn sight better than it was the first time.

His first time ashore in Okinawa was during the Battle of Okinawa in Spring 1945, what the Okinawans called “The Typhoon of Steel” for the thousands of tons of shells dumped on the island.  Glick was on the crew of the USS North Carolina, a battleship that supported major fights in Guam, Saipan and Okinawa.  His primary duty was as a trumpet player in the ship’s band, tasked with helping keep crew morale up.  He’d practice on the mess deck each morning and the band would perform during refueling and mail delivery at sea. 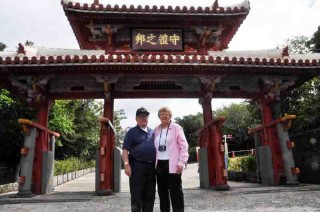 Life at sea during war is never easy, and Glick’s battle station was a compartment just forward of one of the Carolina’s massive 16” guns.  His job was damage control, keeping the gun working and fellow crew members safe.

The trip to Okinawa this time was much more serene for Glick, who chose the visit aboard a cruise ship to celebrate his 90th birthday.  He and his wife Judy sailed through waters first encountered 70 years ago, and then came ashore a week ago to do some sightseeing.  Their first stop was the former Japanese Naval Underground Headquarters and a tour through the caverns and rooms still remaining and refurbished.  There was also a brief stop at the Memorial Monument at the Headquarters and a trip to the observation point for a grand view of Okinawa today.

His next stop was Shuri Castle, where he recalled hearing on the intercom in April 1945 “adjust fire, you’re hitting something that looks like a castle”. As Lloyd and Judy Glick toured Shuri Castle they were impressed and glad it had been restored as a historical site and found it quite impressive. They wrapped up the day trip with a quick lunch at a local restaurant before having to return to the cruise ship to sail on to Tokyo the next day.

During the tour Glick repeatedly expressed that he was one of the lucky ones that stayed on his ship, and how much he admired the Marines that stormed the beaches. He felt those service members that never returned “shouldn’t fade from our memories” and regretted the civilian casualties during the war.