Higashi Azalea Festival offers food for both body and eyes.

A bit of welcome rain, and abundant sunshine, are doing their part to bring Higashi Village azaleas to full bloom, just in time for everyone to enjoy the 32nd Higashi Village Azalea Festival. 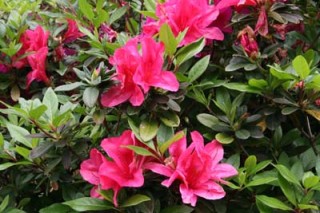 Entrance to the Azalea Park costs ¥300 during the festival.

The festival officially began nearly two weeks ago, but the vivid blooms are just now coming into their own, with this weekend marking the start of the most scenic time.  The festival runs until March 23rd.  There is an entry fee to the flower gardens, with adults and high school students paying a modest ¥300.  Junior high school age students and younger are free for the festival, which runs daily 9 a.m. ~ 6 p.m.

This weekend features entertainment in the form of a magic show with Magician Kina and a performance by Maruke.  The program runs 1:30 p.m. ~ 2:50 pm.  Next weekend take in Higashi Village street dance, Okinawa dances and karate on Friday from 12:30 p.m. ~ 3 p.m.  Saturday showcases the Meio University Eisa Group performance, another by Okinawa International University Eisa Group, and Nago Sakura Taiko.  The performances run 1 pm. ~ 3:10 p.m. Sunday the 23rd from 10 a.m. ~ 3 p.m. it is the Tsutsuji Festival Karaoke Contest.

Next weekend will also feature workshops on Azalea growing.