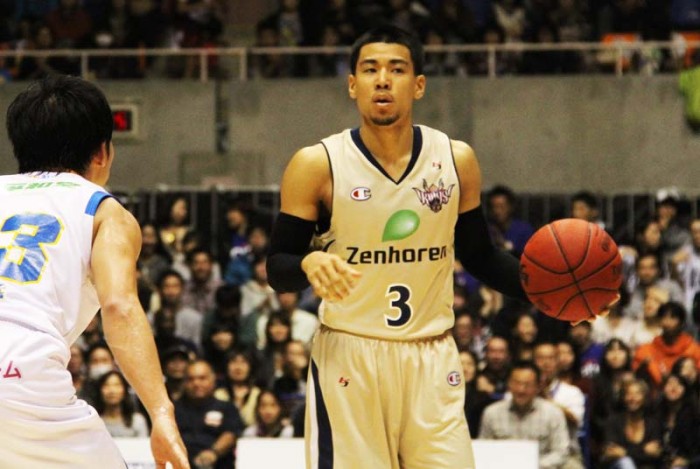 Narito Namisato returned to the Kings’ squad after trying unsuccessfully find a place to play in the U.S.

To the delight of the home fans watching in the Okinawa City Gymnasium, the Ryukyu Golden Kings kept pouring on the records with a pair of victories over the Shiga Lakestars. 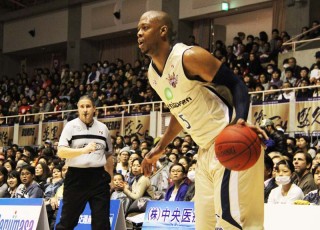 Anthony McHenry did a steady job as usual on both days scoring 15 points in the first game and eight on Sunday, while adding five rebounds, five assists, two streaks and a couple blocks.

Okinawa’s now on another eight-game win streak, has won 21 of its 22 home games, and sits atop the Basketball Japan League’s Western Conference with a 33-5 record.  Already locked into the playoffs, the Golden Kings were out to impress the fans, and they succeeded.  Saturday they slid past Shiga 81-74, then pushed the Lakestars to a 21-19 record with a 78-63 drubbing on Sunday.

Center Kibwe Trim set the pace Saturday with 17 points and a dozen rebounds, then added 14 on Sunday.  Anthony McHenry scored 15 in the first game and eight on Sunday while adding five rebounds, five assists, two streaks and a couple blocks. Jeff Newton had nine rebounds on Sunday.  Draelon Burns scored 11 Saturday and a team-best 21 on Sunday. 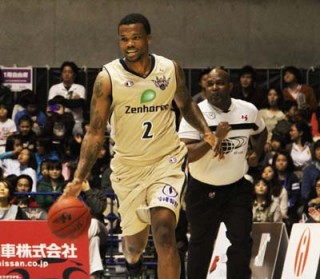 Golden Kings head coach Tsutomu Isa was pleased with the wins, but said “we still need to work on focusing on playing a step ahead so movement won’t stop on the court.” He says his squad needs to “modify the percentage of making field goals.”  Losing Shiga coach Chris Boettcher says Okinawa “showed a fascinating game,” noting “until the 3rd quarter we had a chance to take over, but lost against Okinawa’s aggressive attack.”

Okinawa hits the road this week to face Rizing Fukuoka at the Fukuoka Kyuden Kinen Gymnasium.

Elsewhere in the BJL, tension mounted as the Akita Northern Happinets had their eye on a playoffs berth, with players from both the Akita squad and the rival Niigata Albirex BB ejected.  When tempers cooled, Akita swept the two-game series to lock a berth in the upcoming playoffs, winning 106-90 and 104-94 in front of the home fans.  The Northern Happinets are now 32-8, while Niigata’s still in the fray at 24-16.  The Sendai 89ers, meanwhile, split a series with the Shinshu Brave Warriors, losing the first 89-86 before bouncing back 86-73.  The 89ers are 18-20 while Shinshu is 24-14.