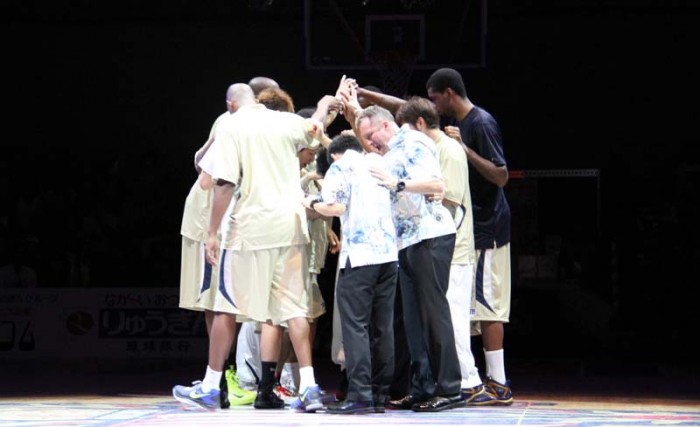 The Kings have a good reason to celebrate as they secured a spot in the playoffs after routing Shimane Susanoo Magic last weekend.

The high flying Ryukyu Golden Kings hammered the Shimane Susanoo Magic, not only picking up the pair of victories at the Matsue City Comprehensive Athletic Park in Shimane Prefecture, but also became the first Basketball Japan League team this season to win a berth in the upcoming playoffs. 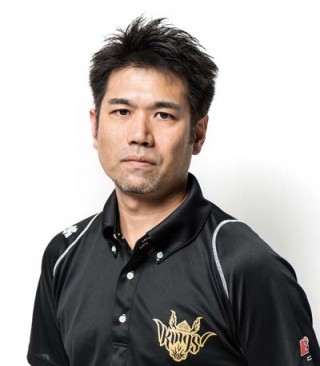 Ryukyu Golden Kings Head Coach has had a very successful first season at the helm of his team so far.

Okinawa won the first game 79-64, then followed up Sunday annihilating the Susanoo Magic with an 84-59 blistering win.  The victories, coupled with a victory by the Kyoto Hannaryz against the Osaka Evessa, automatically put the Golden Kings in the top six of the Western Conference, and with it, a slot in the playoffs for the sixth consecutive year.

Head coach Tsutomu Isa called the games “difficult” but said he was “glad we were able to win.”  He was also pleased with his team having “Five of the players able to play from the beginning of the game, which I think is one reason for today’s victory.”  The Susanoo Magic’s head coach, Reginald L. Hanson, lamented his squad’s problems. “We kept making the same mistakes, which lead to the results we got today. If turnovers were minimized, the results might have been different. This team has to learn to be able to stand up when they should have to.”

Okinawa returns to the home fans this weekend for matches against the Shiga Lakestars at Okinawa City Gymnasium.

Elsewhere in the Basketball Japan League, it’s the battle for the Eastern Conference title, with two teams in the hunt for the top spot.  The Toyama Grouses and the Akita Happinets are the best in the conference, although well back from Okinawa’s 30-5 record. The Akita Happinets hold the lead by a whisker with its 30-8 record, splitting a pair with the Aomori Wat’s.  The Wat’s won 75-68 in the first match up, and with the stronger Happinets ruling the Sunday game 79-54.

The Toyama Grouses have run their string to 29-9, beating up the Saitama Broncos 91-81 and 81-79 as they’ve won 8 of their 10 last games.  Meanwhile, the Fukuoka Rizing got a head start on the weekend by dumping the Oita HeatDevils 69-64 Friday, then hitting hard on Saturday for a 66-57 win.  The Fukuoka victories bring them to an 18-20 record, good enough to lock them into one of the five remaining Western Conference playoff slots.  Oita’s now 15-24.

The Yokohama B-Corsairs split a weekend pair with the Shinshu Brave Warriors: victorious 72-69 on Saturday, but losing 88-68 a day later.  League reigning champion Yokohama falls to 17-19, while Shinshu leaps ahead to 23-13.  The Niigata Albirex BB also split over the weekend, losing to the Iwate Big Bulls in their first-of-two, 69-66, but bouncing back 76-70 on Sunday. The Albirex bump up to 24-14 on the year, while the Big Bulls are holding top marks with their 26-10 record with a dozen regular season games left to play.

The Takamatsu Five Arrows found out what a victory was like on Saturday, thumping the Nara Bambitious 95-63 in Takamatsu.  Sunday the Bambitious turned it around, putting seven players into double scoring figures to win 95-84.  The Five Arrows are now 15-23,while Bambitious is 12-24.