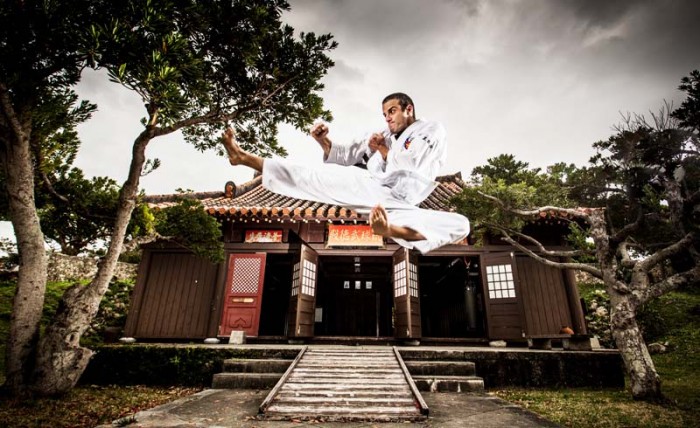 Kevin Chaplin of Oshukai showing his prowess is a discipline of Shorin-Ryu Karate and an instructor at the Oshukai Yomitan Dojo. (Photo by Pete Leong www.fotoshisa.com)

Shorin-ryu style Karate and Kobudo will be showcased over the coming week as the Oshukai Sohonbu International Karate Headquarters in Yomitan opens its doors to the public.

The seminar is an Oshukai event, but the public is welcome to come and watch. Non-members can also join in the seminar, with the only caveat being that visitors politely introduce themselves and make prior contact if they want to actually train with the organizers. 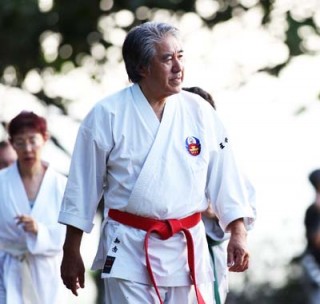 The World Oshukai Dento Okinawa Shorin-Ryu Karate Do Kobudo Federation, represents the traditional martial arts of Karate and Kobudo from its Okinawa base. The President and Chief Instructor is Hanshi Kenyu Chinen, 9th dan Okinawa Shorin-ryu Karate and 9th dan Okinawa Kobudo, a student of some of the greatest Okinawa masters of the 20th century: Shugoro Nakazato, Katsuya Miyahira and Shinpo Matayoshi. The World Oshukai Federation currently has about 250 dojo in Asia, Europe, North and South America and Africa.

Karate originated on Okinawa, a product of the ancient Okinawan culture. The center of the Ryukyu Kingdom was the Shuri Castle. The Shuri Te, now called Okinawa Shorin-Ryu, became the premier style of karate.  Shorin-Ryu is the oldest Karate fighting style. Its founder, Grandmaster Sokon Matsumura, was the only person in the history of Karate who was awarded the honorary title of “Bushi” by the King of the Ryukyu Kingdom. Sokon “Bushi” Matsumura called his fighting style Shuri Te.

Okinawa Kobudo is a style of the weapons fighting developed by the Matayoshi Family. It was created in the nineteenth century by Shinchin Matayoshi and developed later by others in the family. The major weapons used in Okinawa Kobudo include: Bo, Sai, Tonkuwa, Nunchaku, Jo, Sansetsukon, Nunti, Eku, Kama, Kue, Timbe, Suruchin, Tetcho and Tekko.