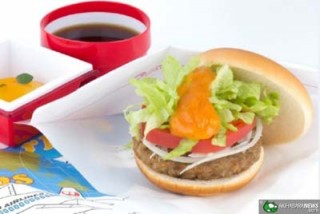 Japanese burger chain giant Mos Burger is for the fourth time teaming with Japan Air Lines to offer its burger fare to passengers.

Mos Burger is now serving its burger combo Air Mos, a healthy burger “Mos Yasai”, which is being served as the second in-flight meal to both economy and premium economy passengers just before landing at Los Angeles, San Diego, Chicago, Boston, New York, London, Frankfurt, Paris, and Helsinki on flights from Tokyo’s Narita Airport.  The same burgers are being served on flights from Tokyo Haneda Airport to London and Paris.

The Mos Yasai burger –Yasai means vegetables—is served with a carrot sauce made from carrots, onions, celery and fruit.  The burgers are being served on JAL through the end of May.