Narito Namisato back with Golden Kings 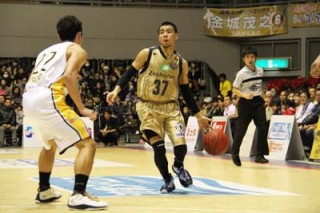 Narito Namisato before his try in the U.S.

Narito Namisato, the guard who successfully played with the Ryukyu Golden Kings but quit the team after 2012-13 season in order to try to break into the NBA in the U.S. has returned to the fold.

Namisato got chance in the U.S. to show his stuff a couple of times, but was not picked up by a team in th U.S., and he finally returnd to Okinawa. After arriving he has kept training by himself.

He finally approached he Kings and asked to play with the team again. The bj-League slogan is “Give a chance to people who yearn to play basketball!”, and so the Kings said yes.

His request reportedly took the team by surprise, and they have not even been able to provide Namisato his uniform yet. Also, it will take some practice for him to become an effective member of the squad. IN any case, the Kings expect Namisato to play on the court soon.

Namisato says “I really appreciate that I can come back to the Kings, and the members and staff accept my rejoining. I know the Kings this season is doing very well, and I hope me joining the team will be power us up more”.

From now on, Namisato’s uniform will bear the number 3, instead of his former #37.