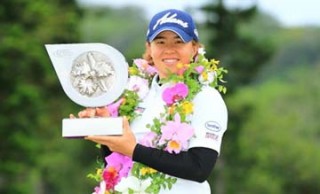 Four birdies on her last ten holes was exactly what was needed for Onnarin Sattayabanphot to sweep past the defending champion to win the Daikin Orchid Japan Ladies Professional Golf Association tournament in Okinawa and claim the ¥18 million paycheck.

Sattayabanphot, playing in her fourth full season on the JLPGA tour, upended the Daikin Orchid defending champion, Rikako Morita, in capturing her second career tour victory.  She was well ahead of Airi Saitoh and Bo-Mee Lee in taking the win.

Sunday’s final round looked to be all Morita, who was last season’s money-list title holder, but only for a few holes.  Rattled, she began losing it, as did second round co-leader Ritsuko Ryu, who bogeyed three of her last five holes on the front nine to falter.  Yuko Mitsuka was bogeying too, but Morita managed to pull off three birdies to improve to -7 for the tournament.  Morita was fighting to stay relevant, shrugging off challenges from groups playing ahead of her, but Sattayabanphot began making her move late on the front nine.

Mamiko Higa, a 20-year-old Okinawan, surged ahead with birdies on the 8th, 10th, par-5 11th and the 16th to finish with a -6 for the tournament.  Not to be sidelined, Sattayabanphot continued pressing with birdies on 7, 9, 10, 11 and the par-4 14th to jump to -8 and the lead.  Higa finished the Ryukyu Country Club course first, tied with Ji-Yai Shin with -6.  Sattayabanphot’s subsequent 67 finish left her with a two-stroke lead, and the frustration of waiting to see how Morita would challenge.

Morita was only a stroke off the lead after a 14th hole birdie, but couldn’t hold on.  The 24-year-old Morita ended at -6, tied for second.  For the 30-year-old Sattayabanphot, it was her first JLPGA victory in nearly a year.