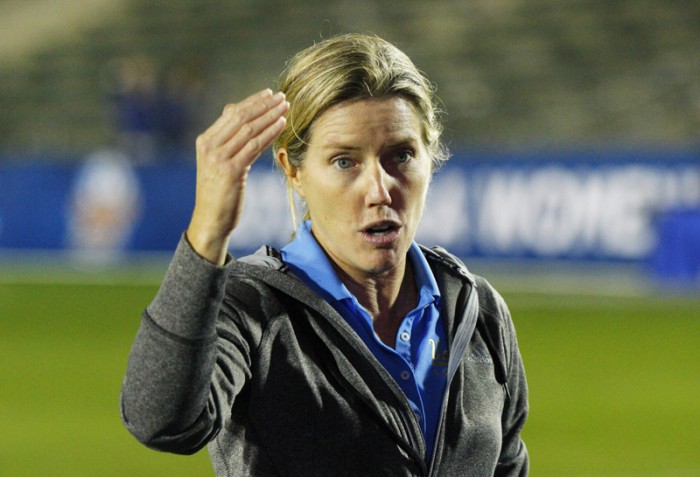 The UCLA Bruins women’s soccer team has won the Pacific-12 Conference (Pac-12) championship eight times since it was established in 1993. The team has appeared nine times in the College Cup, made 18 appearances in the National Championship Tournament (NCAA), finished 2nd place three times (2000, 2004, and 2005) and won its first national championship in 2013.

UCLA will be playing against INAC Kobe Leonessa on March 23rd at the Okinawa Comprehensive Athletic Park.

Japan Update had an opportunity to hear some thoughts of UCLA women’s soccer Head Coach Amanda Cromwell on Feb 26th before the team’s trip to Okinawa.

Former U.S. National Team player Amanda Cromwell came to UCLA on April 12th, 2013 after coaching for 14 years at the University of Central Florida.

During our discussion over the phone, she said “This will be my first visit to Okinawa, and I’m quite excited about this trip. I also look forward to the game against INAC Kobe that should be a very exciting match.” She continued that all team members are also looking forward to get to know the island and visit the many tourist sites that they have only seen on the internet.

When asked how she feels upon going against her opponent who was her former team player Homare Sawa, she said, “Sawa was a good player, always came well-prepared, and was one of the best players in the team. She knew the game well and knew the tactical part of it. It is an honor to be playing on the same field with her again.”

She was also looking forward to seeing the friendly faces of fans in the US military, and many Japanese fans as well to come out to see the game. “I expect them to welcome and support us. All in all, I expect this to be a very good and enjoyable experience,” she concluded.