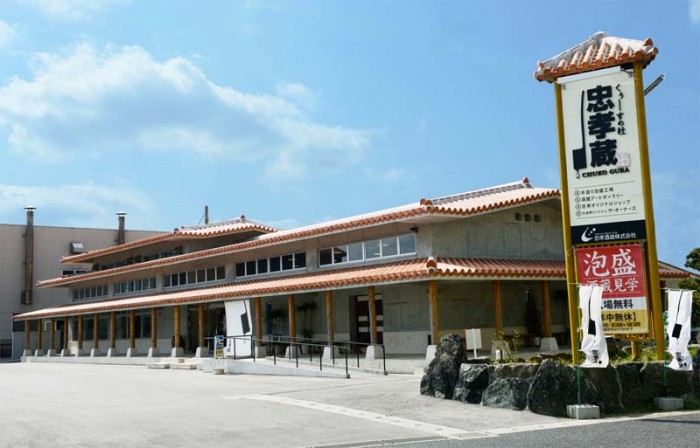 Chuko-gura exhibition hall and sales facility is the venue for a weekend festival on Apr. 19 & 20.

Awamori is the Okinawan tipple that anyone who has visited the island and come into contact with its residents even briefly, is sure to encounter.

Visitors get a look on how Okinawan awamori is made.

Okinawan people love their awamori, and it has plenty of fans on the mainland, too. For that matter, even many people overseas are starting to appreciate the drink. It’s a fact, awamori is considered to be more than just a drink. It’s also a gift and a treasure that preserves the current era in a sort of time capsule, as it is often given as a present on festive occasions and then people save it, sometimes for dozens of years, as it only gets better as it ages.

Chuko Awamori brewery in Tomigusuku City is a producer of high-class awamori, whose specialty is that they produce the ceramic jars that preserve and age awamori best. In addition, they can also provide the customers with special made labels and even engravings on the ceramic bottles they produce or on regular glass bottles. A customer can get a name, favorite words of wisdom and company logo on the jar, almost anything that is requested. 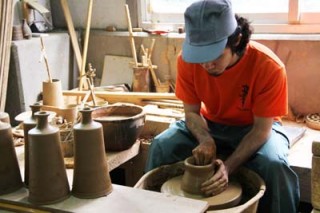 greatly depends on what kind of pottery is used. He says that, “Whiskey is barrel process, Japanese Sake is tub process and Awamori is pottery process.” They then mastered what kind of pottery perfects the aging. The pottery studio is open for public, too. In addition to vessels for Awamori, their studio produces cups, vases and other ceramics.

Many people know that awamori gets smoother as it ages. That’s one reason why Okinawan people have regarded awamori as a family treasure since ancient times, to be enjoyed only on some special day. For a wedding ceremony, each family usually brings awamori that is then mixed together as a symbol of the two families joining together, and it will then become the new family’s treasure. They sometimes keep it until their children become adults, and drink it together with them as a celebration. Many families keep that custom even today. 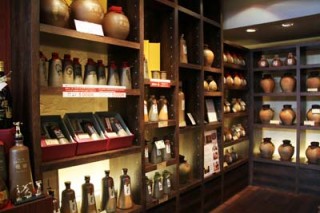 Chuko sales facility display of the company’s line of products.

With that in mind, Chuko has created an Awamori keeping service where, in their own huge cavern, they keep customers’ bottles in ideal circumstances until it’s desired to be consumed.

Chuko Awamori Brewing Co. and Chuko-gura, which is the facility housing the factory shop and warehouse, are located in the Nakama district of Tomigusuku City. There they organize regular tours to demonstrate Awamori making. It’s not necessary to make an advance appointment for the tour, however, it’s strongly advised to make an advance appointment because the tour groups are kept small and groups 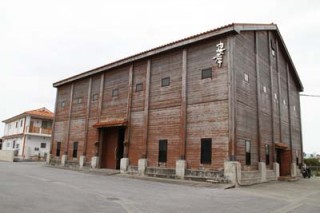 Chuko’s wooden warehouse is a good landmark to locate the brewery.

with reservations take a preference. Visitors can walk in and are welcome, but may have to wait for the tour to start as it takes place once an hour.

Perhaps the best time to visit Chuko Awamori brewery in the near future is the Chuko-gura Spring Festival that takes place on Apr. 19th and 20th at the company premises. During the festival all pottery for Awamori aging is sold 10% off, other vessels, vases or cups are 30% to 70% off. There are also raffles, stage events and food booths, and, of course awamori tasting.

Chuko-gura is located at 556-2, Iraha, Tomigusuku City. For more information, or booking a tour e-mail to hitomi-ts@chuko.org  The location is at http://goo.gl/maps/qag9j