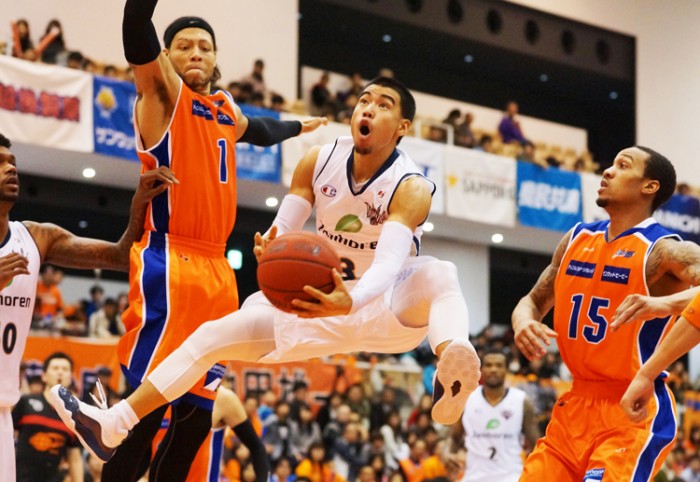 Another weekend, and another loss for the high-flying Ryukyu Golden Kings, who were taken to task by the Niigata Albirex BB. 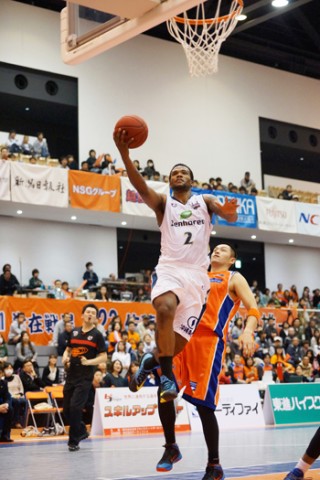 Draelon Burns was the most effective player in Kings’ team. (Photo Junya Nashiro)

The Golden Kings fell victim to the efforts of Albirex pacemaker Nile Murry, whose 23 points pushed Niigata to a 79-68 win.  Draelon Burns picked up 20 for Okinawa, along with 11 rebounds as the Kings suffered their second loss in as many weekends.  Morihisa Yamauchi tallied 13, teammate Kibwe Trim picked up 10 points and 14 rebounds, and Ryuichi Kishimoto scored nine.

Okinawa head coach Tsutomu Isa said his “defense was not functioning, and Niigata had the feeling of wanting this victory 100… no… 200 more times than the Kings.”

Sunday swung back Okinawa’s way, hammering the Albirex BB 84-65 to push the season record to 38-8, while the Albirex stalled at 28-20.  “We were overwhelmed yesterday,” said Okinawa’s head coach, “and today I reminded the team to take pride and face Niigata. Because they did, we won.” Draelon Burns again was the leader for Okinawa, scoring 23 points and pulling in 11 rebounds. Naoto Kosuge dropped in nine points and Narito Namisato had seven.

Okinawa comes home to the friendly confines of Okinawa City Gymnasium this weekend.  The Golden Kings face the Hamamatsu Higashimikawa Phoenix in the last pair of 2013-14 regular season games for the team.. 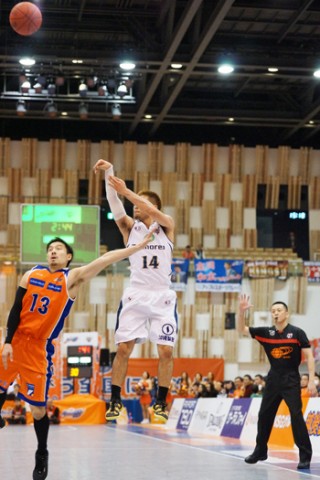 Ryuichi Kishimoto trying for one of his nine points, Saturday. (Photo Junya Nashiro)

The Phoenix split their series against the Shiga Lakestars, losing 86-81 in the first match, and then bounced back to take a tight 92-89 win on Sunday.  The Phoenix are now 26-20 and Shiga’s 25-23.  The Bambitious Nara, meanwhile, pulled off a sweep of the Oita HeatDevils, taking a squeaky 78-76 victory Saturday, and a nearly as tight 73-67 win to round out the series.  Bambitious is only 17-31 on the year, while Oita’s 20-28.  The two squads faced off against each other four times in five days, with Oita taking only one of the four.

The Iwate Big Bulls swept their series against the Akita Northern Happinets, in a battle of the race for second in their division.  With Iwate’s 78-75 and 81-78 road wins, the two teams are clinging near the top of the leader board.  Iwate’s now 34-12, while the Happinets dropped a notch to 36-12.  The Yokohama B-Corsairs outlasted the Gunma Crane Thunders Sunday to pick up an 87-77 win.  Yokohama’s now 20-25, while Gunma’s 12-33.