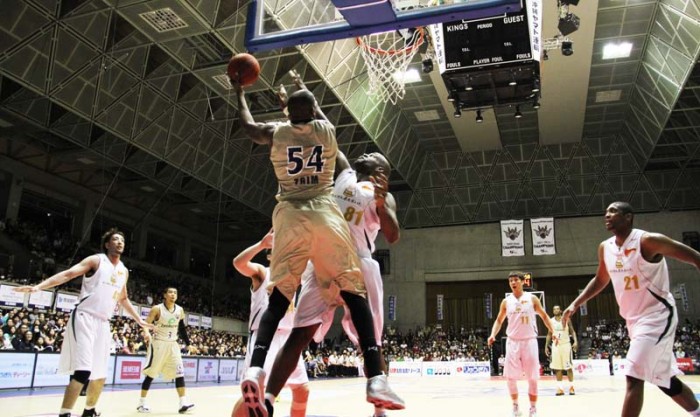 Kibwe Trim (#54), together with team mate Draelon Burns, were the power pair that labored the Kings to an overtime victory, Saturday.

The Ryukyu Golden Kings closed the season in flamboyant style, sweeping the Hamamatsu Higashimikawa Phoenix in front of the mainland team’s home fans, while at the same time establishing a record number of victories in a single Basketball Japan League campaign.

The Okinawa squad marched into Okazaki, in Aichi Prefecture, where the Western Conference champions first battled their way to a 72-67 overtime victory, then capped the regular season with a 78-72 win that propelled them to a record-setting 43-9 record under head coach Tsutomu Isa.  A year ago, former coach Koto Toyama led Okinawa to a 42-10 record. 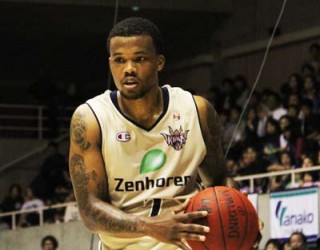 Draelon Burns has been the hottest player in the Kings’ squad lately.

The pair of wins locks Okinawa into a playoffs opening round bye.  The Golden Kings next go into action on May 10th and 11th in Okinawa, in front of the home fans.

The Phoenix gave the Golden Kings a run for their money in the opening game of the series, when head coach Tsutomu Isa said “the second quarter was terrible. Small mistakes were made.”  Draelon Burns racked up 25 points while teammate Anthony McHenry poked in 22, while hauling down nearly a dozen rebounds.  The Kings were well ahead at halftime, but Hamamatsu took over control in the third period as the Kings couldn’t find the basket.  It was again McHenry and Burns that kept Okinawa moving to the overtime victory.

Sunday was a different story, as Okinawa came out fired up.  Burns was again hot, scoring 20, while teammate Kibwe Trim picked up 14.  Ryuichi Kishimoto had 13, while McHenry scored nine, while also grabbing an equal number of rebounds, as well as five assists, three blocks and three steals.  “The season’s theme was experiencing the power of unity,” says head coach Isa, “and this is a win, which the whole team won.  I am extremely satisfied.”  Phoenix head coach Tomoya Higashino was disappointed, but still upbeat that “we were able to learn the small degree that was missing, so at the playoffs, we will give them a scare.”  The Phoenix head to this weekend’s playoffs at 27-25.

The Toyama Grouses were also on top of the bubble, tying an old record as they coasted to an easy sweep of the Tokyo Cinq Reves, 103-66 and 106-84, to post a 41-10 season record.  Like Okinawa, the Grouses have the weekend off with a playoffs first round bye.  The Iwate Big Bulls were also in a bulldozing mode over the weekend, dumping the Sendai 89ers 82-73 and 99-66 on Sendai’s home court, stretching their record to 40-12, enough to gain its owe bye in the first playoffs weekend.  The 24-28 89ers did not make the playoffs.

The Akita Northern Happinets also wound up their regular season at 40-12, thanks to a pair of victories over the 24-28 Yokohama B-Corsairs.  Akita won 89-87 and 99-72, earning the right to go against the Aomori Wat’s in the Eastern Conference first round playoffs.  The Wat’s go into the playoffs coming off a series split with the Kyoto Hannaryz.  Aomori was whipped 86-71 on Saturday, but bounced back to take a 68-66 squeaker on Sunday against the number two seed in the Western Conference.  Aomori heads to the playoffs with a 27-25 record.  Kyoto’s 34-18.

The Takamatsu Five Arrows worked hard to sweep their final weekend series against the Oita HeatDevils, eking out an 80-76 victory in the first game, then having an easier time to win 81-63 on Sunday.  The Five Arrows end the season 23-29, while the HeatDevils finish at 20-32.  The Niigata Albirex BB had a very easy final weekend against the hapless Saitama Broncos. The Albirex BB won 78-76 and 112-65 against the 5-47 Broncos. The Albirex BB, ending 31-21, take on the Shinshu Brave Warriors, the Eastern Conference number four seed, in the first playoffs round.

The Brave Warriors turned up the heat against the Gunma Crane Thunders, sweeping the series 95-79 and 105-91, to head into the playoffs with a 33-19 record. The first-year Gunma squad is finished, ending with a 13-39 posting.  The Osaka Evessa, who began the season hot, then turned cold, turned hot again at the right time, sweeping their season finales against the Shimane Susanoo Magic.  Osaka won Saturday, 87-61,and Sunday,83-72, good enough to put them in the playoffs as the number six seed in the west.  The 24-28 Osaka meets the Shiga Lakestars.

The Shiga Lakestars were busy tuning up for the playoffs, bashing the Fukuoka Rizing, 81-68 and 91-86.  The Lakestars head into the playoffs with a 27-25, while the 26-26 Rizing also qualified for playoffs action.