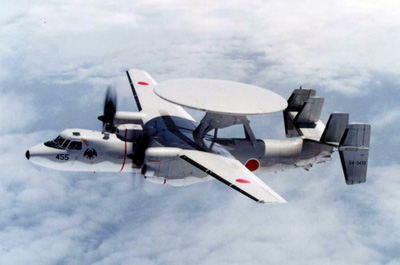 Four E-2C Hawkeye aircraft have been deployed to JASD Naha Air Base.

Concerned about China’s efforts to “change the status quo and threaten the rule of law” in Okinawa waters, Japan’s Defense Ministry has created a squadron comprised of early warning patrol planes, based at Naha Air Base.

Inaugurated Sunday in ceremonies at the Air Self Defense Base in Naha, Defense Minister Itsunori Onodera praised the new unit comprised of four E-2C airborne warning and control planes.  To create the new squadron, the Defense Ministry shifted four of its 13 E-2C aircraft from Misawa Airbase in Aomori Prefecture.  The new squadron will ultimately have 150 personnel stationed in Naha.

Japan’s decision to increase its ocean surveillance comes as China’s intensified its activities in or near Okinawa waters surrounding the controversial Senkaku Island. Since Japan nationalized the five uninhabited islands in 2012, China has sent dozens of ships and planes on patrols into the area situated in far southwestern Okinawa Prefecture.  Already this year, JASDF fighter aircraft have been scrambled more than 400 times to challenge the Chinese planes, an increase of more than 25% from all of 2013.

This is the first time the E-2C AWACS have been on Okinawa.  Defense Minister Onodera calls the current Chinese provocations as “a dangerous situation” requiring a more pro-active Japanese military response.  The Senkaku Islands are claimed by China, which calls them Diaoyu, and also by Taiwan, which has labeled the islands Tiaoyutai.  The waters surrounding the island are thought to contain expansive amounts of mineral reserves, as well as gas.

The Defense Ministry this past weekend also held ceremonies signifying the beginning of a new Self Defense Force base on Yonaguni, the farthest western island in Okinawa.  A radar surveillance unit will be constructed on the island, the first time the JSDF has had forces on Yonaguni Island.