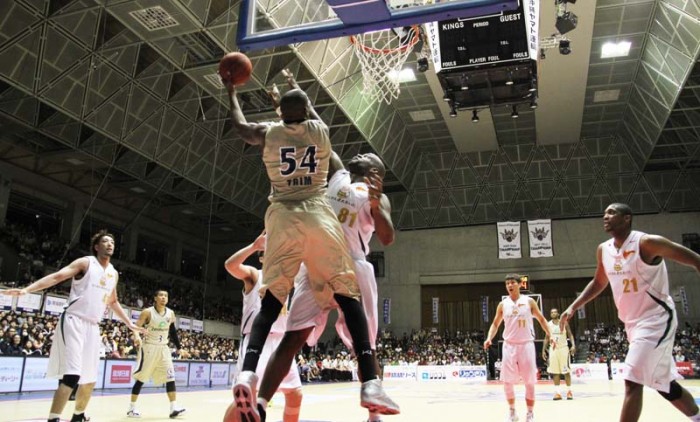 Kibwe Trim scoring one of his 13 points in Saturday’s game.

Proving the old adage that any team can beat any other team on a given day, the mediocre Oita HeatDevils stunned the league-leading Ryukyu Golden Kings, ripping Okinawa in front of its home fans to halt its winning streak at home at 22 games.

The Golden Kings, leading the league with a 37-7 record, had easily picked up a win in the first game of their series at the Naha City Gymnasium, 75-65, their 22nd home win of the season.  Okinawa had lost only one game at home, back on October 12th, and wasn’t expecting any trouble from the 19-25 Oita HeatDevils.  It didn’t work out that way as Okinawa trailed from the outset, finally falling 81-69. 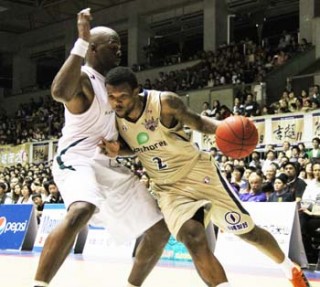 Draelon Burns was hot on both days, but even his efforts were not enough to stop HeatDevils on Sunday.

Draelon Burns was hot both days, picking up 10 points on Saturday and 21 in the losing cause Sunday.  Okinawa Head Coach Tsutomu Isa noted that the “defense gave 80% of what we have prepared, but to overcome in the future, I will expect them to give 100%.”  Kibwe Trim scored 13 Saturday and Naoto Kosuge contributed nine points, as did Narito Namizato.

Coach Isa’s fears were realized Sunday as his squad couldn’t find a spark, trailing by 15 after only the first quarter.  Aside from Burns’ 21 points and 14 from Kibwe Trim, Naoto Kosuge picked up 10 while Jeff Newton and Morihisa Yamauchi scored seven.  Okinawa’s coach Isa attributed part of the problem to “lacking players Ryuichi Kishimoto and Anthony Henry, but once again we were forced to see how difficult it is.”  The Golden Kings’ defense wasn’t good, leading Oita Head Coach Yukinori Suzuki to feel elated that “the endurance of the 40 minutes was what led to this victory, but also because we were able to take the offensive rebounds.” 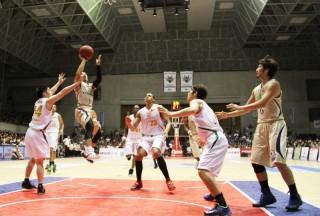 Narito Namizato is aiming to score, Sunday, in a game that saw Oita HeatDevils to put a stop to the Golden Kings’ 22-game winning streak.

The Golden Kings are on the road this weekend, venturing into Niigata Prefecture to face the 27-19 Albirex BB.  The Albirex last weekend pushed the defending league champion Yokohama B-Corsairs farther from a shot at the playoffs, handing them an eighth loss in 10 games, 92-82.  Yokohama battled back with a 95-89 overtime win on Sunday, but it appears too little, too late as the B-Corsairs are in the eighth spot in the conference, with only six going to the playoffs next month.

The Toyama Grouses stretched their season record to 36-10 with a pair of wins over the struggling Gunma Crane Thunders.  Saturday’s 97-87 win was nothing compared with the 91-69 pounding dished out to Gunma on Sunday.  The wins push the Grouses into a tie for the Eastern Division lead with Akita.  Akita edged the Sendai 89ers 99-97 on Saturday, but fell on Sunday, 112-91to allow Toyama to catch up and tie the conference lead.