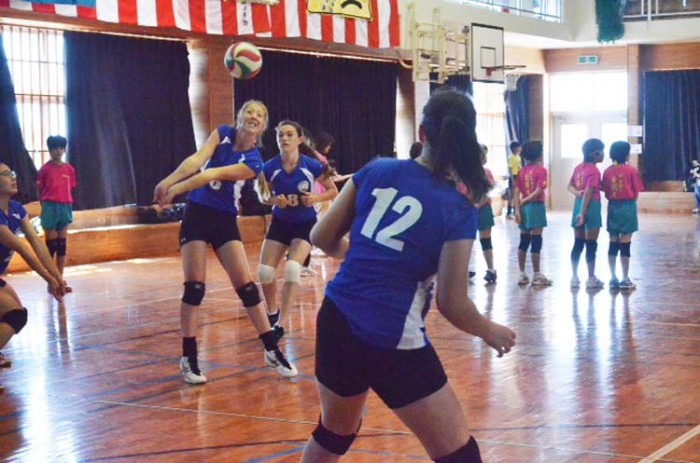 Shisa team discovered early on that they had to try hard to win.

Twenty-four players, nine chaperones and one intense weekend of volleyball. The Shisa Juniors volleyball club traveled to Ishigaki, Mar. 28-30, to participate in a volleyball tournament at Yashima Elementary School. 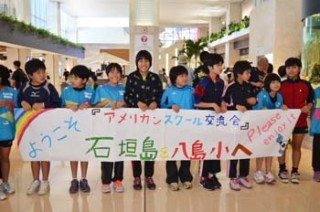 Ishigaki students welcomed the Americans with a banner and smiles.

Shisa Juniors is a volunteer-run volleyball club for American and Okinawan middle and high school girls. This year-round program offers girls interested in developing their volleyball skills a chance to learn ins and outs about this competitive sport.

The players had the opportunity to demonstrate their skills against Japanese elementary and junior high teams as they traveled off island for the first time this year.  This informal tournament was an all-day event that proved to be a fun, yet educational, experience for the Shisa team. 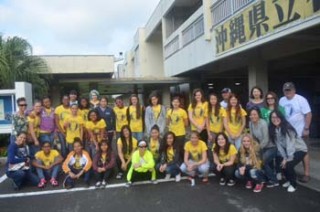 “I decided to go on this trip because it was a chance to get better at volleyball, and I could learn a lot from the local teams,” remarked club member Madie Friedland.

The exciting Saturday began bright and early for the young players. They arrived at the Yashima gymnasium with their game faces on and ready to play volleyball. A total of 10 teams took part in the tournament, and the Shisa volleyball players quickly discovered they had to step up their game if they wanted to win. The busy day was filled with victories and losses for the Shisa team, but the most important thing was that everyone had fun and learned something new.

“I don’t rate it [the success of the players] by only the score. I rate it out by a total concept. I think that the girls could have done better, but based on the objectives I wanted to see happen today, I think we achieved the goal of bonding, mutual teamwork, friendship, trust, honesty, strength and cultural information, and I think future practices and games are going to be much more productive,” head coach and founder of Shisa Juniors volleyball club, Art Arao commented. 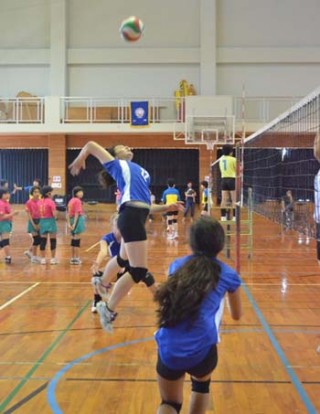 The day-long tournament was a good cultural experience, according to team members.

This trip not only provided the club members with a chance to play volleyball away from home, but it was also a huge cultural learning experience. From the start of the trip to the end when all the girls stepped off the plane back on Okinawa, the coaches and chaperones used this weekend as an opportunity to teach and involve the young girls in Japanese traditions and customs.

Everyone had her part to fulfill. Whether it was cleaning rooms, picking up trash, carrying equipment or washing down the shower and bathroom, no one was excluded from their duties. The girls learned that cleaning up after themselves and taking care of other people’s property is a sign of respect in Japan.

The trip to Ishigaki was more than just a chance for a team to participate in volleyball games and challenge themselves a little bit. One of the main objectives of traveling off island was to allow the players to immerse themselves in Japanese culture, and truly gain an understanding of the country they are living in.

“I think staying in the youth hostel and eating all the different kinds of Japanese food was good for the team to experience. It was good for us to see how they [the Japanese] live,” said Hannah Webb, captain of the Shisa Juniors volleyball club.

Three months of planning and countless dedicated hours made this trip possible, but the time and effort was well worth it. Arao revealed that he wants to continue scheduling trips for the players and hopes to be able to return to Ishigaki next year.

“Because of the success of this trip, I had planned on possibly doing something up in mainland. But that depends on the availability of players and coaches so we‘re looking at maybe a July or August timeframe,” Arao mentioned.

Whether that trip happens or not, the girls who went to Ishigaki can be satisfied that they had the opportunity to travel, learn about Japanese culture and play the sport they love. Without a doubt they made some new friends, and some great memories to last a lifetime.