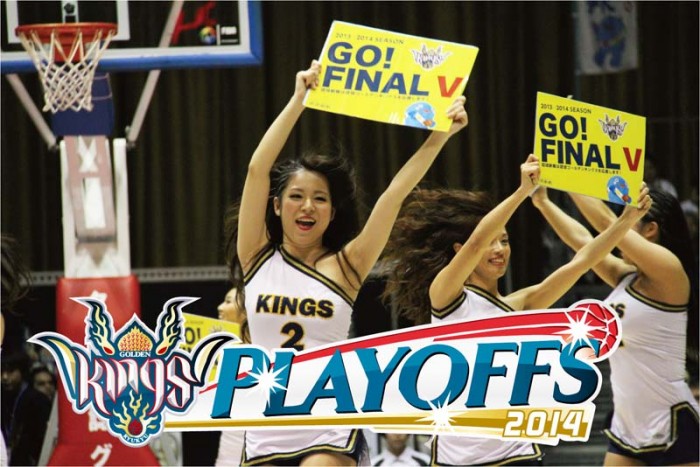 As the winners of the Western Conference the Kings skip the first round of the playoffs and will face their first contest on May 10 and 11 at Okinawa City Gym.

It pays to be the Western Conference Champions, as it earns a free opening weekend of the Basketball Japan League playoffs.

The Ryukyu Golden Kings, by winning the Western Conference title, gains a bye in the weekend’s basketball action.  On top of that, last weekend’s sweep of the Hamamatsu Higashimikawa Phoenix rolled the team to a new record high number of wins: 43-9 on the season. That’s a game better than last year, when the Golden Kings finished 42-10 and won the Western Conference championship, only to get blown out of the playoffs.

Before this season, fans worried about Kings because some of main players left the Kings after the last season, and it was the first season of Tsutomu Isa as the Head Coach. But wow! They did great work and marked the highest number of wins. Now it becomes the more serious game and everyone has to concentrate. Yes, the playoffs are this weekend.

As you know Kings lost the playoffs last season even though they finished in 1st place.  It was a nightmare for not only the squad, but also Kings fans were shocked a million too. Playoffs are not like a season game, but only two games, and lower place team attacks happen often, and they beat even 1st place teams.  The Kings should learn already such and begin seriously thinking about playoffs now, and they will win in this playoffs!

The Kings have an advantage of playoffs so they don’t need to play the 1st round of the playoffs because they are the 1st place squad. This weekend, May 3rd and 4th, in the first round for the Western Conference, 3rd place team Shiga against 6th place Osaka 4th place Hamamatsu against 5th team Rizing Fukuoka.  Then the lower team of the two winning teams in first round will play the Kings in conference semifinals on the 10th and 11th. The second place of western conference Kyoto Hannaryz will play to the upper team of the  first round.  Then both winning teams of the conference semifinal go to Ariake Colosseum in Tokyo and play for the conference championship on May 24th.  On 25th of May, both conference champions team play for the league championship in the same arena, Ariake Colosseum, and the champion of the season 2013-2014 will be born.

The Kings don’t care which team comes to Okinawa for playing the conference semifinal at Okinawa City Gym. Tip off is at 1 p.m. the 10th, and the team, just needs to do its work and each player with highest concentration. The Kings should win and capture the championship of the season!