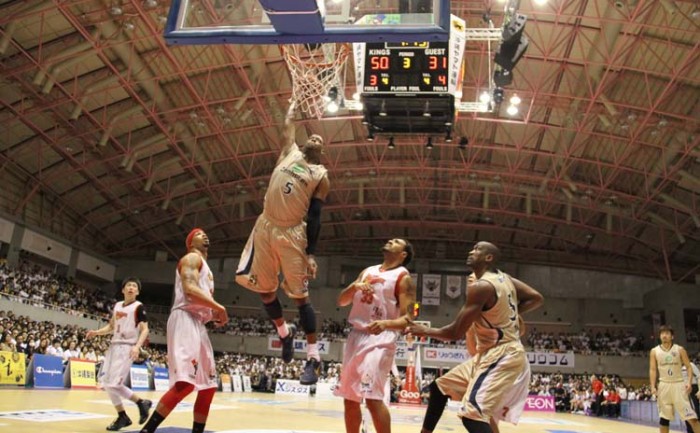 Anthony McHenry sinks one more as the Kings gave Hamamatsu a thorough rubbing in the weekend bj-League semifinal match.

The Ryukyu Golden Kings put on a spectacular show for the home fans, demolishing the Hamamatsu Higashimikawa Phoenix in a pair of semi-final showdowns that propelled Okinawa to the Conference Championship finals. 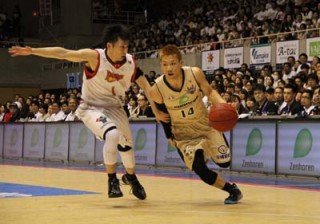 Ryuichi Kishimoto charges ahead in Sunday’s game, in which Kishimoto scored 17 points.

There was nothing even remotely close in the contests, with the Kings taking a 79-49 win Saturday, then followed it up with a 72-55 shellacking on Sunday.  For the season, Okinawa beat the Phoenix all eight times they squared off.

Anthony McHenry led Saturday’s parade with 16 points, 13 rebounds, seven assists and even a steal.  Teammate Draelon Burns was right on his heels with 15 points, a half-dozen rebounds and a pair of steals of his own.  Ryuchi Kishimoto was close behind with a dozen points. Morihisa Yamauchi popped in nine points, as did Kibwe Trim, while Naoto Kosuge and Narito Namisato each had eight points. 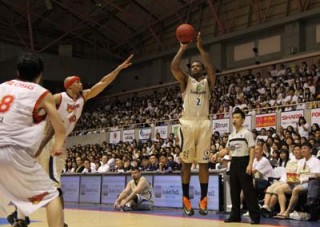 Okinawa now heads to the Final Four in Tokyo’s Ariake Colosseum, their fifth visit to the capital in the team’s seven-year history.  They’ll take on the Kyoto Hannaryz, who struggled through a mini-tiebreaker to win the second semi-final series, squeezing past the Shiga Lakestars.

The Lakestars were hot in the first game, winning 87-82, but the Hannaryz pounded back with a 97-73 win early Sunday afternoon, forcing the 10-minute tiebreaker.  Kyoto won it handily, 25-15.

In the Eastern Conference, it was the lucky number 13 for th Toyama Grouses, who coasted to a trip to the Basketball Japan League’s Final Four in Tokyo, beating the Niigata Albirex 83-69 and 85-68.  The Grouses, with a 44-10 record, the league’s second best behind Okinawa, had no trouble in the series with Niigata.  They’ll face the third-seeded Akita Northern Happinets on May 24th in the Eastern Conference final.

The Northern Happinets had no difficulties in its semi-finals series against the Iwate Big Bulls, pulling off an 80-77 win on Saturday, then stretching their efforts Sunday for an 82-59 win.  It was a disappointment for the Big Bulls, who’d aced a dozen straight victories heading into the semi-finals.