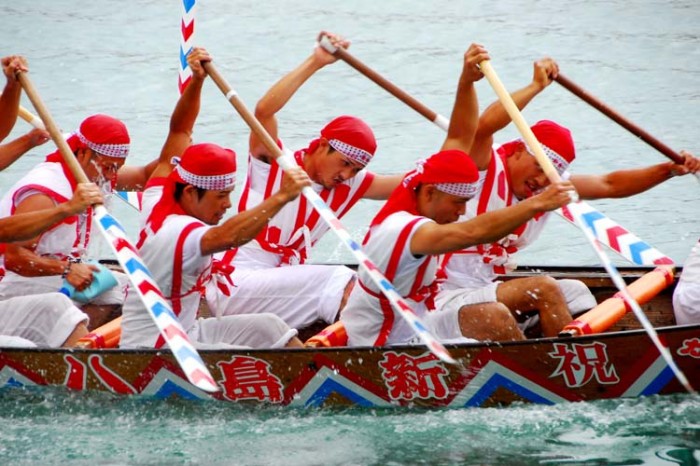 The annual day-long dragon boat races in Itoman have a history going back hundreds of years, and are always held on May 4th of the lunar calendar. The races include contests between teams from different localities, company teams, womens’ teams and even a race to chase and catch a duck with bare hands.

The dragon boats are in the water, just waiting for the Sunday morning races at Itoman Fishing Port.

The dragon boat races extend back over a 500-year history, and are absolutely free for spectators to watch. http://goo.gl/maps/LGkjq 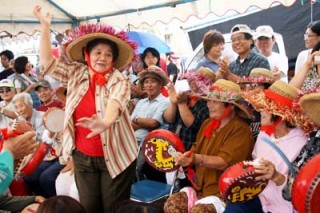 Even the spectators are fun to watch as they give their soul to cheer their home team.

The Itoman Haarii takes place Sunday, which is May 4th on the lunar calendar, which virtually everyone in Itoman City follows.  The event features a variety of boat races in different categories, including junior high school, general races and others for foreigners, and of course, a set of three races featuring rival areas of Itoman City.

The Itoman Haarii’s not one to be missed, as crowds of spectators flock to the southern Okinawa region for this day of colorful uminchu activities, folk music and of course, foods.  Besides boat races, Itoman Haarii features plenty of other local entertainment.

Admission is free for the races.  Vendor purchases cost money.

The most visible event in Okinawa in early summer is Haarii. At fishing ports throughout the Okinawa Prefecture, the races using traditional fishing boats called “Sabani” unfold.

Originally, Haarii was a festival for praying for the bumper fish catch and voyage safety by “Uminchu”, “Uminchu” meaning a fisherman in Okinawan dialect. “Umi” is sea in Japanese, and “nchu” means “people”. 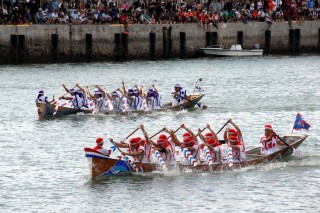 The teams give it their all in Itoman Dragon Boat Races.

In recent years, it was popularized and became an event in which women, children, and also visitors can also participate freely.

In some races, the crew has to tip the boat over at the halfway point of the race, after which they have to straighten the boat again, climb onboard, bail the water out and continue to finish the race.

For Haarii in Okinawa, it is believed to have descended from China to the Ryukyu Dynasty about 600 years ago. Since it was a great event of the Ryukyu Kingdom to pray for a bumper crop, good health, and voyage safety, while fishing, it spread to virtually everywhere. It is said that Haarii was spread to Miyako and Yaeyama districts by the fishermen of Itoman.

Although “Haarii” tradition has been interrupted at times because of the influence of the establishment of prefectural system carried out in the Meiji Era, and the Battle of Okinawa of World War II, it remains alive as a fisherman’s culture of Okinawa.

Throughout Okinawa, things are often different, even if the event is labeled Haarii. The style of Haarii varies, such as “Ugan Haarii” which wishes voyage safety and big haul prayer, “Occupation Haarii” to whom the residents of the area perform a confrontation game according to occupation, “Overthrow Haarii” in which the boat is raised again after it is overturned intentionally and a race is continued, and even “Madonna Haarii,” which is a female confrontation.  On top of that, there’s the “Getting duck competition,” in which a swimming participant aims to catch a swimming duck with his bare hands.

Normally, large ‘Haryu ships’ carrying some 42 crewmembers are used for the Naha Haarii, which is carried out during the Japanese Golden Week every year. As for the features, the sculpture of a dragon is placed at both ends of the boats, and it is a vivid ornament clearly influenced by Chinese culture.

On the other hand, at “Haarii” performed in other areas including Itoman, much smaller “sabani,” traditional fishing boats of Okinawa are used. Originally they were made of wood without the use of a single metal nail, but since the suitable wood has disappeared, as have the builders who mastered the art of building sabani, boats used in these races are made of fiberglass these days. Although the size of “Sabani” varies with the area, about 11 persons including paddlers, guides, bell ringers, and others are onboard.

Itoman’s not the only haarii taking place, but one thing they have in common is that they begin rather early in the morning.  Some of the others are: