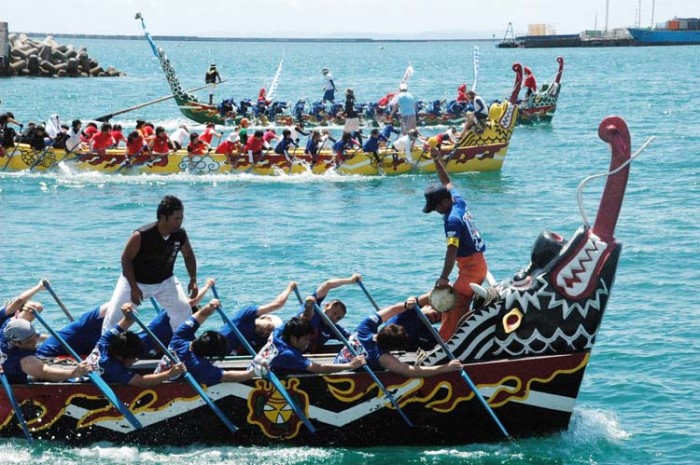 The biggest event on Okinawa during the Golden Week is Naha Haarii dragon boat races that take place at Aja Port area over the weekend.

A string of national holidays lasting through Tuesday has schools, government offices and many businesses shuttered as Okinawa embrace what is commonly known as the “Golden Week.”

Golden Week is greeted both in mainland Japan and Okinawa, with fun and frolic the operative works to describe activities by the vast majority of islanders.  It began Tuesday, the birthday of former Japanese emperor Showa.  It was the first of four holidays, with Constitution Day on Saturday, Greenery Day on Sunday and Children’s Day on Monday, and since Greenery Day falls on Sunday, Tuesday is added as an extra holiday this year. 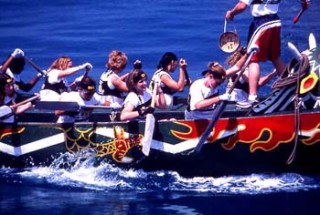 Constitution Memorial Day, Kenpou Kinen-bi, marks the day in 1947 Japan’s new constitution went into effect.  Before moving forward, double back to May 1st which, although not a legal holiday, is treated as one by most companies and businesses.  May Day is popular with Japanese, because it helps make Golden Week the longest vacation time of the year.  Greenery Day, Midori no hi, is Sunday.  Until 2006, it was celebrated on April 29th, the birthday of former Emperor Showa.  Now, it’s been structured as the “in between the holidays holiday” bridging the gap between Saturday’s Constitution Day and Monday’s Children’s Day.

Children’s Day is Kodomo no hi, formerly known as Boys’ Day, a day when Okinawans and mainland Japanese pray for their children to grow up healthy.  Historically, it’s also been a day to honor sons, and Japanese families with boys hang colorful carp streamers, Koinobori, outside their homes, and often display May dolls inside. 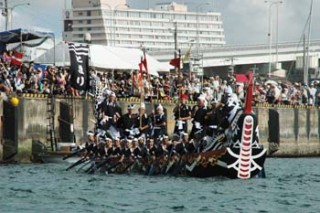 Before each heat the boats paddle around in front of the spectators.

Golden Week got its name decades ago, when the term was coined by movie theater operators after experiencing the birth of the new holidays in 1948.  As the story goes, Golden Week is the perfect opportunity to take in some golden movies.

It’s a week where work comes to a screeching halt across this island nation, and everyone finds a place to go on vacation.  It’s nearly impossible to find a plane, train or bus ticket available anywhere in the country during Golden Week, unless one made the reservations months in advance.  Don’t expect to find any empty hotel rooms either; tour agencies say Japan’s booked solid.  The demand for Golden Week vacation destinations is so high, Japan and Okinawa can’t handle it.  Instead, foreign sites including Thailand, Guam, Saipan, Hawaii and even the American West Coast benefit.

Businesses across the country began closing a day—or even two—before the holiday week began, and will not start settling back to normal until at least the middle of next week.  Apart from the holidays themselves, businesses grant employees liberal vacation opportunities, with the average being about 4.5 days.  Add it all up, and Golden Week is golden indeed, with as many as 11 days off.

In Naha, the Haarii Festival is about to begin, with the festivities Saturday through Monday at the city’s Shinko Wharf.  Several dozen haarii boat teams comprised of 14 racers will challenge each other in categories that include military and children’s’ races.   The finals of the 40th Annual Haarii Festival are set for mid-afternoon Monday. Festivities all three days are free, and open to the public, 10 a.m. ~ 9 p.m., with everything from live entertainment to food and drinks vendors to souvenir stands.

The traditional Okinawan dragon boat race custom originated centuries ago in China, as a part of prayers for safety and good harvests.  Today, dragon boat races are held throughout Okinawa… in small villages as well as the more organized festivities of the big cities.  Naha Haarii is the largest of the festivals, with a dozen boats with hand carved heads and dragon faces, and tails in the form of dragon tails.  The main dragon boat races are Monday, with the challenges beginning at 10:30 a.m.  The finals take place starting at 4:40 p.m. following the traditional prayers to the ocean’s god for safety.  Races are by category, with children, community groups or companies, and the American military taking on the Japanese Self Defense Forces.

Prior to each heat the crews row slowly around the port in front of spectators.Races on the first day pit junior high school student teams of Naha City against similar student teams from other areas on the first day. The races are performed as Buddha’s wish for salvation of the world. The Haarii “public experience embarkation” takes place on the 4th and the main races are on the last day.

Naha Haarii’s origins can be traced to China from where it came to Okinawa in the 14th century. A legend has it that a Ryukyuan prince who saw the “Haryu Ship” races in Nanjing, China, while studying there, had a race boat copy made after coming back to Okinawa. Villages in other parts of the island made their own boats and the races prospered as a national event of Ryukyu Kingdom. The custom was abolished when the Ryukyu Kingdom was taken over as a Japanese Prefecture in 1879. Although the race was temporarily revived the games finally stopped in 1928. The event was again permanently revived after World War II.

The greatest difference between Naha Haarii and Haarii of other areas within the prefecture is the size of boats. Although the crew of the Haarii boat elsewhere is about 11 persons, the boats of Naha are larger with crews of some 40 people.

A ceremony and the final race will be performed on the Naha Haarii’s last day. It begins with a ceremony, while the crew who wore the clothes of Haarii performs ancient rite and sing Haarii songs, and row their ships slowly and confidently around the port showing off for spectators before the race.

On Sunday, a “General Haarii experience boarding” is permitted, in which anyone can participate. Since this event is very popular, it will be crowded. Participation is free, but those wanting to get onboard need to gather at the receptionist station at 10:30 a.m. Children under school age cannot participate.

Parking at the Haarii Festival is limited to nearly non-existent. Festival visitors are encouraged to take public transportation. Maps and other festival information are available in English at http://www.naha-navi.or.jp/nahahari.html.