Daimon Cup weekend futsal tourney is for everyone 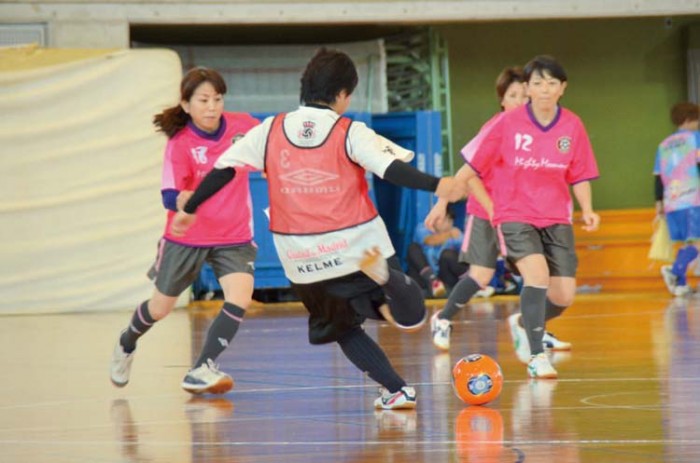 Played on hard wood floor on a small court and with a small ball, a futsal match has plenty of action.

This weekend’s Daimon Cup is a charity sports festival, but is also an introduction to futsal, a variation of soccer that’s being played on smaller indoor fields.

The festival takes place Saturday 10 a.m. ~ 5 p.m., and Sunday 9 a.m. ~ 8 p.m., at the Ginowan City Gymnasium.  Map: https://goo.gl/maps/70g8K.  Admission to the festival is free, but organizers are requesting donations of rice, instead of money. 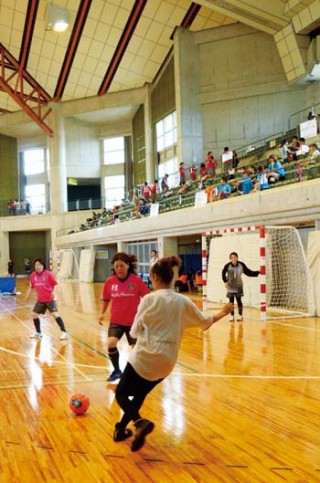 The emphasis in a futsal match is on improvisation and technique.

Futsal stems from the Portuguese influence, and is played mostly on indoor pitches, meaning on a smaller size venue.  Typically it is played five-on-a-side.  Its name comes from the Portuguese futebol de salão, which can be translated as “hall football”. It was developed in Brazil and Uruguay in the 1930s and 1940s.  With the World Cup in full swing in Brazil, futsal is an appropriate festival sport.

The Daimon Cup, although basically girls’ tournament, is a sports festa for all Okinawa residents to have fun and it is free to all, not just to watch sports but also to participate in activities.

This time, children from the Brazilian Soccer School will also be participating, guiding visitors through the venue’s different events, which include a Women’s futsal tournament, Futsal classes on Saturday from 10 a.m. – noon, a raffle for all visitors, a free sports massage, and performances by children. A DJ at the venue makes it a hip and lively event!

To be clear, in Brazil futsal is played by more people than football, but does not attract as many spectators as the outdoor sport. In fact, some futsal players have moved on to careers as successful professional football players.  On each team, one of the five players is the goalkeeper.  The game is played on a hard court surface, with a smaller ball than a regular soccer football, and with less bounce than a regular football. Unlimited substitutions are permitted in this friendly sport, while the surface, ball and rules put the emphasis on improvisation, creativity and technique as well as ball control and passing in small spaces.