Okinawa sumo offers challenges to everyone 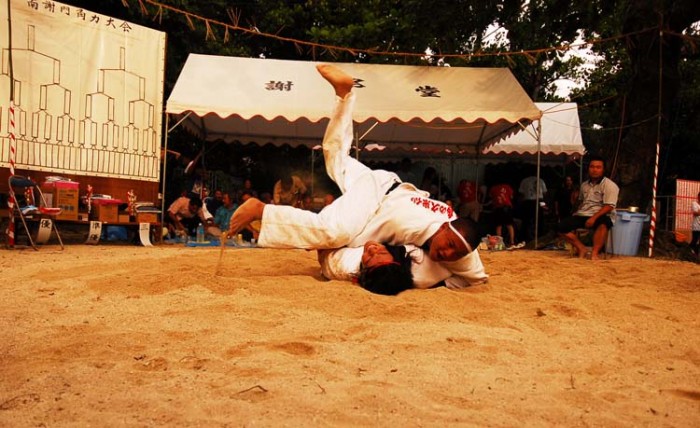 Okinawan sumo bouts take place on sand and with no ring or boundaries, so the only aim is to topple the opponent on his or her back in two of the three tries within a five-minute time limit for each.

Sumo is one of Japan’s national sports, but Okinawa Sumo is a bit different, with everyone able to get involved; even the spectators.

With Golden Week past, the Okinawa sumo season is heating up, with the first matches of the season set for Saturday at the Henoko Beach in Nago City.  The location is at http://goo.gl/maps/wl9xs.  The bouts begin at 6 p.m., and admission is free.

The Okinawan sumo is a sport that is usually practiced during the summer season lasting through September. The tournaments are held in conjunction with local summer festivals.

Okinawa Sumo dates back to the Ryukyu Kingdom era, with a different perspective that combines judo and wrestling.  Rules?  Not many, and they’re easy.  Each opponent fights three times.  The one who falls on his back loses.  And yes, everyone can join in.

Also known as kakuriki, Okinawa Sumo is a modified form of martial arts practiced in the southern prefecture.  Okinawan sumo wrestlers wear heavy gi, a martial arts costume, belted with a simple red or white cloth.  It takes place on sandy soil, with beaches considered the best.  As with traditional sumo, opponents start with a good right hand grip on the other’s belt, while the left holds the right side of the belt from the other side.  This protects arms from being injured during falls.

A low squat improves balance, and the referee oversees everything as opponents try to flip the other over.  Competitions are typically best two out of three falls, with a five-minute time limit.  If the time for a bout runs out, referees vote on the winner, which is then announced by raising a white or red flag. One big difference is that there is no ring, and thus, no boundaries.