The day-long event covers all genres of music.

Music spanning a variety of genre will be filling the air across Park Avenue in Okinawa City on Saturday as merchants, vendors, musicians and citizens mix and mingle for Kanaderu Park. 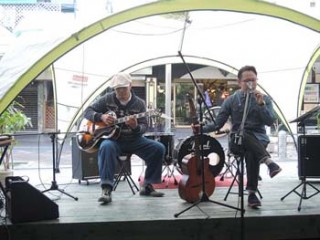 Music will be nonstop on six stages along Chuo Park Avenue.

Six separate stages are being set up for the afternoon and evening events, which are free to the public.  The action begins at 2 p.m. and runs until 8 p.m.

Stage A Sideways Stage kicks off at 2 p.m., with a series of performers including Clint Walker, Sideways, D + D, Otis Yoshie, Shima Blues Band and Good Rockin Blues Band.  Stage B In front of Indian store will showcase

Stage C at bar SIX features records, CDs, used clothes and other items for sale, while Stage D Player’s Café will be pumping out the tunes with Zutto Tomodachi, Aska’sSoul Syndicate, SINGETU, Ryugunotsukai, Rira☆Kichi, and ska band ALL JAPAN GOITH.

Stage E Watashinoheya Acoustic stage will feature the music of Ishiko, Twins, Minami Yamakawa, The Rody and Holiday.  On Stage F Otobora Stage, check out the jazz, funk and world music being performed.