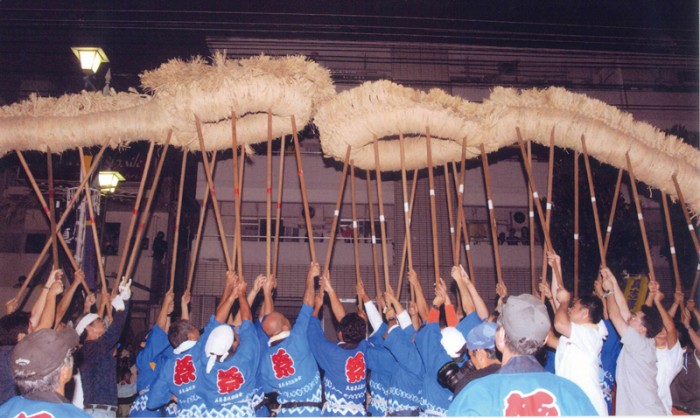 Mashiki tug-of-war participants try to knock down the opponents’ rope at the start of the game.

There’s a traditional Okinawa tug-of-war taking place Sunday in Mashiki just outside Okinawa Convention Center, but the way it plays out is anything but what’s expected. 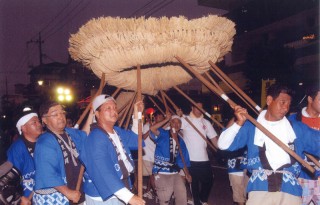 The half-rope is carried on sticks to meet the opposing team’s half.

Mashiki’s yearly tug-of-war will change the whole meaning of tug-of-war you have seen before. What’s different about the Mashiki tug-of war –a twist also applied by Ojana—is only Mashiki and Ojana districts in Ginowan City, have this unique practice in Okinawa of making both sides of the tug-of-war fight each other over the rope before actually pulling it.

Both sides of the rope are 30 meters long and at start, each is propped up with wooden sticks. Both halves of the rope are then pushed against each other until one topples and falls. The site is almost as if two dragon heads are fighting.

This type of “tug-of-war” is called agie in the Okinawan dialect, and the tradition has continued since 1671. As the tradition has continued for more than 300 years, it even has grown larger over time. It’s purpose is to show gratitude to the gods, ask for protection and seek prosperity for the city. It is held every year on June 15th according to the lunar calendar.

This unique tug-of-war takes place Sunday from 6 ~ 9 p.m. on Convention Street in Ginowan City (Map: https://goo.gl/maps/Exykr). No parking is available at the venue and highly recommended for visitors to use public transportation.