The upcoming Okinawa gubernatorial election is beginning to shape up as both an ideological battle and a time of mud-slinging by the three candidates who appear to be the combatants. 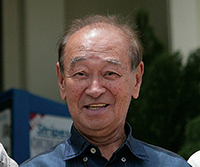 Incumbent governor Hirokazu Nakaima is officially tossing his hat in the ring today for a third term in office, a move that upset other competitors’ plans.  The 74-year-old Nakaima is determined to prove his decisions were right in approving the land reclamation permits last December that set the stage for constructing a replacement airfield facility for the unpopular Futenma Marine Corps Air Station now in Ginowan City.  Following months of study, Nakaima gave the green light to the project shortly after spending time with Prime Minister Shinzo Abe and obtaining promises of plenty of money for the governor’s pet infrastructure projects, including Naha International Airport expansion and a rail system for the island.

Nakaima’s decision to steer the Liberal Democratic Party forward another four years is proving complicated for the LDP’s political machinery.  The Okinawa LDP prefectural chapter has endorsed Nakaima, and now the national apparatus must do likewise despite being worried about the two-term governor’s age and political standing.  Nakaima’s swift movement to the political race ahead also made it difficult for the national LDP movement to shun him. 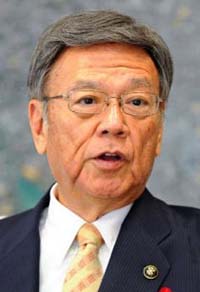 Naha City Mayor Takeshi Onaga, an opponent of the base relocation project in Okinawa, thought he was a shoe-in for the governorship because of his Liberal Democratic Party status as former Okinawa chapter secretary general.  Nakaima’s re-election bid has put the LDP officialdom behind him, shunting Onaga.

Onaga has rallied, persuading the principal opposition parties under the banner of The Gubernatorial Candidate Selection Committee.  The group wraps into one unit five groups: the Social Democratic Party, People’s Life Party, Communist Party, Socialist Masses Party and opposition members of the Okinawa Prefectural Assembly.  The parties met more than a week ago to formally throw their support behind Onaga as their candidate.

Interestingly, even though Onaga has signaled he is running for governor, he hasn’t made it official.  There’s talk of a September announcement, but for now, Onaga is only saying that he is against construction of the replacement airfield facility at Camp Schwab in Nago City’s Henoko district.  At one point, Onaga was supporting the MCAS Futenma move, and now he’s not, while Governor Nakaima was originally opposed to the move, but now nominally supports it.  Onaga’s drawn support from Nago Mayor Susumu Inamine and some 15 members of the Nago Assembly.  Inamine asked directly for Onaga to run against Nakaima, promising his support, but Onaga skirted the commitment, saying only that “of course my heart is with you, and I will support you in every way I can to stop construction of the new base.”

Further muddying the waters of the election campaign is Mikio Shimoji, former president of the Okinawa political party Souzou, who’s announced his bid as an independent.  The 52-year-old Shimoji is taking a different tactic to the voters, promising a public referendum over the base relocation issue.  He says he’ll bring a referendum within six months of the Nov. 16th gubernatorial election, letting the voters’ voices be hard with a simple up-or-down vote.  Shimoji says “This is the obvious way to make the final decision.”

Shimoji’s also concerned about the Okinawa economy, which is suffering far more than other parts of the nation.  He wants to solve academic and economic issues, promising to create an atmosphere necessary for a new generation of politicians to “take the helm with their new ideas and concepts.”

Shimoji is already accusing Nakaima of earning his seat in the last election with promises to oppose moving Futenma anywhere on Okinawa, only to have the governor do a 180-degree switch now.

Meanwhile, members in the Naha Municipal Assembly have said they also will back Onaga.   The ten assemblymen are joining 15 Nago Assembly members who want Onaga, rather than the official LDP candidate, the current governor.