Sakae-machi means prosper, describing a flourishing town that is one of the oldest shopping arcades in Okinawa. It started after the war, and used to be the center of Naha City’s shopping.

It’s popularity faded, but lately, it is becoming popular again among young people, as well as café and bistro owners who like its retro-inspired site. Sakae-machi shopping arcade tries to hold a Yatai festival once a month on the last Saturday between June and October. After being pushed off by a typhoon last month, organizers and merchants say they’re ready for 5 p.m. Saturday, when the festival goes down for the first time in two months. 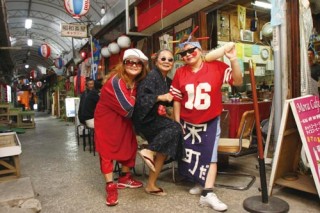 The classic, old-style arcade provides various stage events like band shows and dances by local entertainers, and of course food stalls. They also have mini games for children, so whole family can enjoy it. One of the highlights –and really this is something not to be overlooked—are the ‘Oba rappers’ which means ‘aunty’ rappers in Okinawan slang. ‘Oba rappers’ is a popular rap group formed by ladies working at Sakae-machi shopping arcade, playing at a lot of events on Okinawa.

Other than that, local entertainers from the arcade will warm up the festival. The festival starts at around 5 p.m., but everyone says they’re not exactly sure, because it is in Okinawa, which means ‘uchina time’.

Sakae-machi shopping avenue is located in the Asato district of Naha City. Parking lots are limited around this area, so the monorail or other public transportation is recommended. As always, the Sakae-machi Yatai festival is free, with exception of purchases of foods, beverages and souvenirs. Map: http://goo.gl/maps/Qd2FD