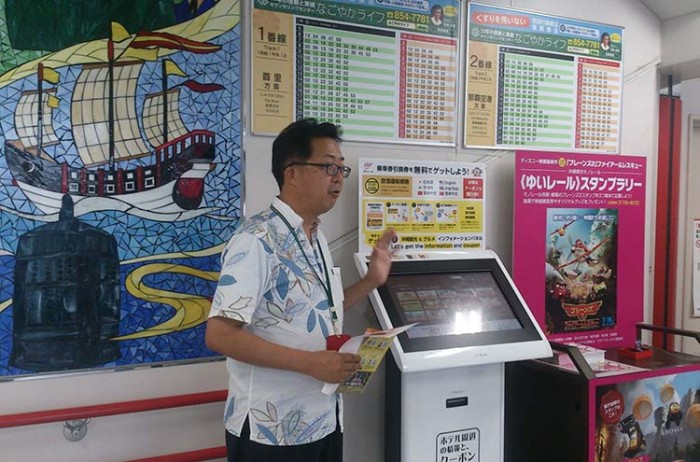 Okinawa’s a great sightseeing island with its emerald ocean waters and blue skies, but one of the biggest complaints tourists express is the lack of quality Wi-Fi service.

TIDA Square, a local internet media company been tackling the Wi-Fi problem, as well as helping tourists with language issues with locals.  The principal complaints are common: tourists ask something at a store, shop or restaurant, and they’re met with blank stares.  There’s simply not enough English spoken by Okinawans.  Okinawa Prefecture is trying to improve English skills of locals, but officials say they’re not seeing good results yet.

The WiFi in Okinawa is equally dismal, but TIDA Square is taking steps to fill the void.  Okinawa, the company says, is far behind other urban sightseeing locations when it comes to free and fast Wi-Fi, and complaints come fast and furious. 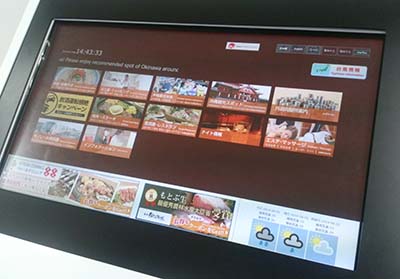 TIDA Square’s touch-screen terminals offer multi-lingual information to visitors and are very easy to use.

TIDA Square Company, whose main business is running a social media site “TIDA Blog,” is working to install multi-language digital touch-screen terminals to 14 hotels in Naha City.  Hotels like Hotel JAL City, Palm Royal Naha, Daiwa Roynet Hotel and others currently have a modern, speedy Wi-Fi service, and TIDA Square is installing touch screen terminals to them to provide information on Okinawan sightseeing places, restaurants, night spots, shopping, esthetics, massages and other information in English, Chinese, Korean and Thai, and also Japanese. These terminals are connected to the Internet through the free Wi-Fi in the area where they are installed.

Hiroshi Shimada, the chairman of TIDA Square, says multilingual service and free Wi-Fi at resort destinations are critical issues, but Okinawa does not get good marks from foreign tourists, who complain about how slow and ineffective service here is. “We know the government is trying to do something,” says Shimada, “but it’s not there yet and is taking a long, long time. That’s why we decided that we would do this ourselves.

TIDA is also collaborating with Yuirail now. They recently installed their first terminal at the Kencho-mae Station with plans of other stations to follow. When someone prints a coupon from one of their terminals to use in a participating business, they can get a coupon in return from the business, and exchange it to a Yuirail ticket. For example, after a visitor drinks or eats at a restaurant that’s taking part in the system, they are given a coupon that can then be exchanged for a Yuirail ticket at Kenchomae, Miebashi or Makishi station. Shimada says as an extra bonus the new coupon program could even help reduce the number of drunk drivers.  He says “We are glad to help foreign tourists get information from our terminals and have fun on Okinawa.