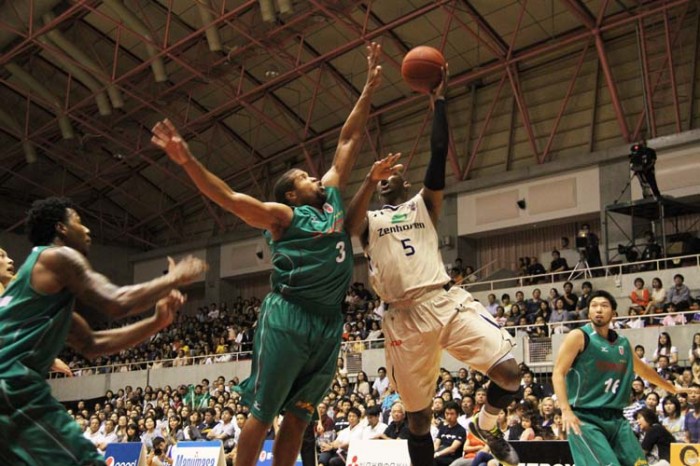 Playing in front of the Okinawa home fans as the professional basketball season got under way, things didn’t work out for the Ryukyu Golden Kings as they took on a rival National Basketball League opponent and dropped both games. 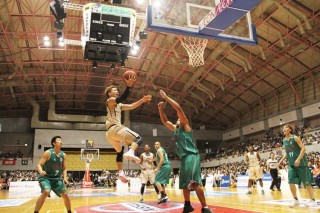 The kings fought hard but at the end could not match Toyota’s strong defense and scoring ability.

The Golden Kings fell by two points in the first contest, the first ever with an NBL team. The Okinawa squad couldn’t get going in the opening two stanzas, but were able to mount a second half rally to close the gap.  It was too little, too late, but Tsutomu Isa, the Kings’ head coach, still said “the games were productive and meaningful. We are not inferior as compared to Toyota individually, but Toyota was stable. We could learn a lot from Toyota.” 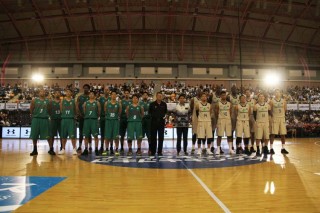 The teams line up before Friday’s game.

The Kings were losing 37-28, going into the third quarter, but then came to life. Okinawa gradually captured Toyota’s defense, and Narito Namisato and Draelon Burns made scores and cut the lead. In the fourth quarter, Ryuichi Kishimoto made a 3-point shot at the important situation and turned back temporarily. However, with one second to go, Toyota made a score and Okinawa missed the chance to win.

Okinawa’s Kings started slow in the second match before losing76-75, but from the beginning of the game, they pressed to widen the point gap. In the fourth quarter, Draelon Burns and Ryuichi Kishimoto aggressively attacked Toyota, despite Toyota dominating the games, and playing steadily both offense and defense. Overall, the Kings suffered from the strong defense and scoring ability of Toyota, the same as the first game.

Beck Donald, head coach of the Toyota Alvark Tokyo, says, “this was the first pre-season match for Toyota. Both teams played high-level games, and in the second match we played our game for the first half, but in the last half, the Kings came back and played without giving up. I was quite impressed with Kings”.

In their next pre-season game the Ryukyu Golden Kings faces the Akita Northern Happinets, the team they beat in the last season’s finals. The game takes place on Saturday at  Ota-ku Gymnasium in Tokyo. The venue opens at 4 p.m. at the game starts at 5:30 p.m. Tickets are available on the internet at http://eplus.jp/sys/main.jsp , http://l-tike.com/sports/kingsintokyo/ , http://pia.jp/t/kings-tokyo/ and https://kings.tstar.jp/cart/fc/RK/login