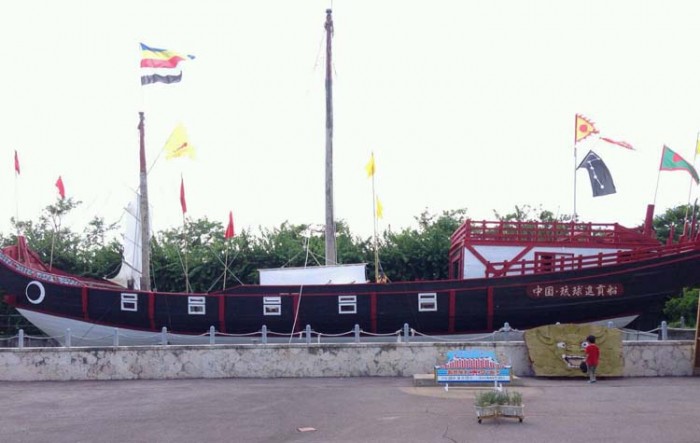 Ships like Nantomaru once plied the East China Sea waters facilitating the lucrative trade between the Ryukyu Kingdom and China.

The replica of a traditional the Ryukyu kingdom era Okinawan ship “Nantomaru,” currently on display at Okinawa World theme park in Nanjo city will be retired in October.

Nantomaru has been on display at Okinawa World since 1992 and it was originally built to celebrate the 20th anniversary of Okinawa World. The Nantomaru model was recreated faithfully according to sailing ships of the Rykyu Kingdom era that used to facilitate the thriving trade between Okinawa and China, although some of them ventured as far as to Vietnam and other South-East Asian countries.

Nantomaru was also used as the model ship in the NHK TV history drama “Ryukyu no Kaze Dragon Spirit” in 1993.

It’s 31 meters long, eight meters wide and weighs 110 tons. It’s been 22 years since the Nantomaru was built, and it will be retired because it’s getting old and is in bad shape.

The “Commerce era of the Ryukyu and tribute ship” Exhibition is currently running through Sep. 30th in the Kingdom History Museum in Okinawa World. The Nantomaru ship will also be on display until Sep. 30th.

The entry to Okinawa World is ¥620 for adults and ¥310 for children from four years of age through to high school age. Okinawa World is opens 9 a.m. to 6 p.m. every day with the last entry at 5 p.m. The theme park is located at http://goo.gl/maps/wv2Bs